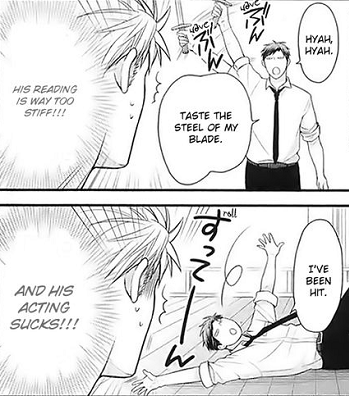 Acting's version of Hollywood Tone-Deaf. In Hollywood, bad acting can only come in two flavors: completely over-the-top and exaggerated, or a stilted, wooden, monotone delivery of every single line. These actors have never heard of suspension of disbelief. They couldn't act wet in a rainstorm.

"Oh, no. The asteroid...is coming towards us. We are doomed. Aaaaahhhh. Exit stage left."

This often happens when characters are forced to reenact a specific event in hopes that it will have the same consequences. Often afflicts school rooms around the world where teachers have students read lines aloud, with the students not caring for the actual tone of the piece at all. What can almost be considered a trope in its own right is to attempt to pay homage to William Shatner with strangely... placed... staccato pauses and... random jumps in pitch. Another popularly used example is if the characters are attempting to fool a third party by acting as if they are having a conversation or argument. Usually, the third party doesn't pick up on how awkwardly the others are talking.

Bonus points if the character's eyes scan slowly back and forth as they read the out-of-shot cue cards.

Also like Hollywood Tone-Deaf, in that professional actors can, well, act. If they aren't very good at their job, you wouldn't be able to tell if they were sucking on purpose for the Show Within a Show. Those who are good at acting typically couldn't mimic a bad actor. Even then, just like above, it'd be hard to tell if the actor was trying to fail — though it's something like common wisdom that only someone who's very good at something can be deliberately bad at something. Also, as per Rule of Funny, genuinely bad acting isn't amusing — or at least not as amusing as Bad "Bad Acting". Impersonations done in Bad "Bad Acting" tend to involve Hugh Mann, Reading the Stage Directions Out Loud, and Most Definitely Not a Villain.

Just to reiterate, this is where characters In-Universe try to act and do a horrible job at it, not when you think someone does a legitimately horrible acting job or even a So Bad, It's Good performance. We have a whole other set of tropes for that.

See Stylistic Suck, the Super-Trope of this, and its subtropes Bad Impressionists and Hollywood Tone-Deaf. This trope can also be an element of The Show Must Go Wrong.

Sokka and Katara stage a confrontation in order to get Katara arrested for earthbending. Frankly, it is astounding that the guards fall for it.

Sokka and Katara stage a confrontation in order to get Katara arrested for earthbending. Frankly, it is astounding that the guards fall for it.