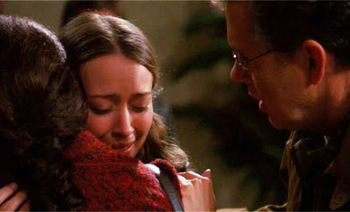 Wesley, Cordelia Chase, Fred, and Gunn joke around in the lobby, while Fred works on some kind of strange contraption that nobody can figure out. Wesley and Cordelia mockingly act out a summary of Buffy and Angel's relationship while Angel is somewhere between Sunnydale and LA visiting his resurrected ex-lover. However it is quickly broken up when Angel walks in on this, much to his annoyance and their embarassment. Cordelia attempts to get him to talk about what went on with him and Buffy, but Angel refuses. He decides to take Fred out for some ice cream (since she's the only member of the gang who doesn't care about the meet-up with Buffy) as Cordelia laments that no-one will ever find out what happened. Angel and Fred are then seen scouring the sewers for a Durslar beast that attacked them while in Häagen-Dazs, despite them not being known for roaming above ground. Although Angel is certain he can kill the Durslar himself, he decides to send Fred back to the hotel.

Back at the hotel, a middle-aged couple named Roger and Trish show up looking for their daughter; the gang assume the couple want to hire them, and ask her questions about what supernatural force they think took their daughter. Roger and Trish explain they already hired a private detective who traced her to the hotel; their missing daughter is Fred. As the gang quickly try to cover their discussion of demonic activity as slang Fred enters the hotel and, unnoticed, spots her parent and rushes up to her room.

Fred's parents explain that they recently got a letter from their daughter telling them she was ok, since she'd been missing for five years, but not to look for her (Gunn can't help but be impressed that the private detective traced them despite there being no return address on the envelope). The gang pretend that Fred was depressed, as Angel suddenly walks in the Durslar beast's head waxing lyrical about the great fight he had until the gang shut him up and pretend Angel works in monster movies and the head is a prop.

The gang head to Fred's room to find she is gone, but the ice cream wrapper on the floor shows she's just been there and fled. The gang don't trust her parents, since Fred seems to be scared of them and she did send a letter asking them not to look for her (and even discuss the possibility the letter may just be a ruse to get close to Fred). Worried about Fred, especially since she's never left the hotel alone since her return from Pylea, the gang decide to split up and search for her deciding to start with the sewers and the library where she used to work.

Fred heads to Caritas, which is still wrecked from the massacre of a few weeks earlier, to see Lorne. Unfortunately for her, Lorne is still depressed over what happened and in no mood to entertain, lounging around in pyjamas and a robe. Fred (after briefly singing 'Row, Row, Row Your Boat') asks Lorne for money so she can leave LA, and he tells her that he understands she's running from her own demons warning her she may not have run far enough.

Angel searches for Fred in the sewers, and, unbeknownst to him, is being followed by a creature that looks like a giant fly with glowing blue eyes. The others search the public library, as Trish tells them how she would pick Fred up from their community library back home after her rounds as a school bus driver. Roger demands to know what Fred is doing with the gang, since it seems strange a physicist would work for a detective agency. As Cordy, Wes and Gunn confer over where else Fred could have gone to it finally hits them she may have headed for Caritas. They call Angel, who is still being stalked, and tell him to meet them there.

At the bar, Lorne makes it clear to Gunn that he's not welcome at the moment (since it was partially his fault that his gang attacked). Cordy tries to claim Lorne works with Angel in monster movies, to explain the 'make-up', but Lorne is in no mood to humor anyone. Lorne tries claiming he doesn't know where Fred is, but Angel convinces him to help, and he tells her where she is but warns him that it's not going to be easy for her...

Meanwhile, an agitated Fred is at the bus station, talking to herself and trying to decide where to flee to (her ramblings manage to scare off a homeless man), when her parents find her. They greet her with love and tenderness, and it becomes clear that she didn't want to see her parents because she didn't want them to know where she had spent the past five years and didn't want to relive those horrible experiences when telling them about her ordeal. They hadn't been menacing at all, and there had been nothing "off" about them. They were exactly what they seemed: loving parents distressed about the well-being of their daughter and confused by the many odd things they kept encountering. With her friends watching in silent support, Fred breaks down in tears and is comforted by her parents as she is forced to come to terms with the fact that the terrible things she went through in Pylea actually happened. They all embrace with love, and just then, a bug-like demon descends upon them in the bus station and starts attacking. All attempts to continue fooling the Burkles are abandoned, and everyone fights the creature, but it is a losing battle with Fred being injured until Trish commandeers a bus and drives over the demon killing it.

Back at the hotel, everyone patches up their wounds and talk over what happened, with Roger and Trish taking the knowledge of supernatural beasts and monsters in stride, just happy to see their daughter. Fred however is now beginning to doubt her place in the group and where she fits in and this, combined with her recent injury, decides to go home with her parents. Roger and Trish are obviously happy to have their daughter return home with them, while the rest of the gang are saddened but respect her decision. Angel later talks with Fred in her room, as she admits that she just built herself another cave here after he left upon learning of Buffy's death.

Fred says her farewells to the gang and leaves with her parents. As they head to the airport discussing what the Burkles are going to do about the lodger in Fred's old room, Fred suddenly sees the bug demon's blood she got on her shirt is now crystals and, working out what's going on, asks to head back. Meanwhile Angel and the others talk about how much they'll miss having Fred and her parents around, only to be interrupted when a bug demon smashes through the hotel's doors, followed by a huge mass of them. As they begin to attack, Fred walks in and sets off her strange contraption which turns out to be a hands-free device that flings an axe across the room. The axe bisects the severed Durslar head, releasing hoards of bugs. Seeing this, the fly creature leaves. Fred now understands what happened; the bug-demon laid its eggs in the Durslar's head which is why it ventured above ground and attacked. When Angel brought the head back to the hotel, the mother or father (Fred believing it could be either or both) attacked them at the bus station and when the parent was killed the rest of the hive arrived to claim the offspring. Fred is commended on her excellent deductive reasoning, and this makes Fred realize she does have a place with Angel Investigations after all and decides to stay. Her parents respectfully accept her decision.

Later, the gang and Fred's parents paint over Fred's wall scribblings to signify her fresh start. While Angel and Fred's dad bond over the knowledge that Spiro Agnew was a demon and Wes and Gunn argue over the correct way to paint, Fred comes across a drawing of her and Angel on a horse. Ready to start moving on from her ordeal in Pylea, Fred paints over it.