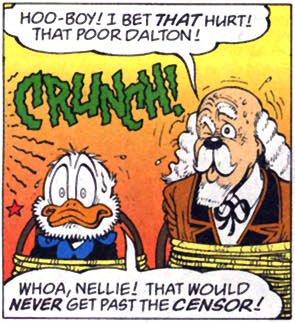 Any wonder why we're not seeing the carnage?
"And then, at the absolute climactic height of the action sequence, everything went dark."
— Fangs of Endearment: A Vampire Novel by Dave Barry
Advertisement:

Or: A Non-View to a Kill

It's finally arrived; the climactic moment where good meets evil, where right fights wrong, where... someone will get their ass kicked! But then, suddenly, the camera decides not to focus on the great battle, but rather on something a little more insignificant, like the pool or some other innocent area, with only the sound of the battle heard (perhaps somewhat muffled) and perhaps the occasional Screen Shake, especially in animated media. Focusing on the faces of observing characters gives a good gauge of the brutality of the fight without showing the fight itself; zooming out farther without reducing the battle noise is a less common variant, but still not too rare in comedies. It stays this way for the entire fight, only showing the aftermath.

There are a variety of reasons for this. The first is money: the producers might not have had enough money to actually film an epic battle, resulting in a Fight Unscene. This might lead to an Offscreen Moment of Awesome. On the other hand, if they care enough, they could combine this with the second reason: artistic quality. A big fight scene might not be that interesting or original - but deliberately not showing the fight, instead focusing on something mundane, that could be considered art. But beware: this could lead to Faux Symbolism. There's also a third reason: perhaps the director did want a really violent and/or bloody battle, but the Moral Guardians objected too much. Or, if it's a cartoon, it could be due to the Rule of Funny. Often, these are shown either through a Big Ball of Violence or zooming outside a building and showing it bounce and tumble around from the force of the battle.

Related to Fight Unscene, Gory Discretion Shot, Big Ball of Violence and Sound-Only Death. Compare and contrast with Charge-into-Combat Cut, Offscreen Moment of Awesome, Relax-o-Vision, and Great Offscreen War. Most of the time, the viewer will have to Take Our Word for It.

As this trope can occur during important plot points, beware of unmarked spoilers.