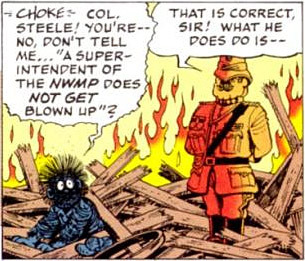 In any disaster, you can expect to get dirty. Volcano erupts? Everyone gets covered in ash. Trudging through the jungle? Yeah, you're gonna get hot and sweaty. Plane crash? Your clothing is gonna get messed up, right?

Not this guy. Most potential Clothing Damage seems to actively avoid him. A tornado doesn't even muss his hair. He laughs as he gleefully skips through The End of the World as We Know It, confident that if he dies, he will die with perfectly creased pants.

Closely related to Dirt Forcefield as well as Beauty Is Never Tarnished, which is more about the person being damaged than the fashion. Compare Improbable Hairstyle and Magic Pants. Such people are often a Badass in a Nice Suit. When it is depicted as an explicit superpower, it becomes My Suit Is Also Super.