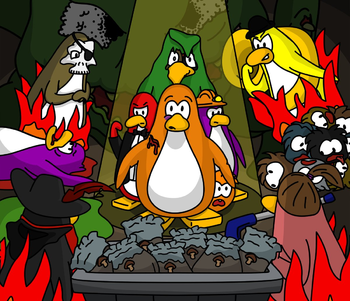 "Once, the center of communication and friend making. Now, a dead zone, dangerous to the unwitting scavenger."
Advertisement:

, which focuses on the online video game Club Penguin weeks after its real-life shutdown in early 2017. To sum the world up now? A terrible place to live. Violent attacks happen often, one wrong move will get you killed, and if you're not fast enough... Game over.

The series currently has one season of 14 episodes aired throughout mid-2017 to early 2018, with a second season currently being uploaded as of mid-2018, as well as a handful of irregular shorts and specials.

The videos of it can currently be found on Near Human Intelligence's YouTube channel. A playlist of all episodes in the series can be found here

, and a full compilation of all Season 1 episodes (named "Club Penguin Shutdown - The Movie") can be viewed here

. In addition, the teaser to the second season can be viewed here