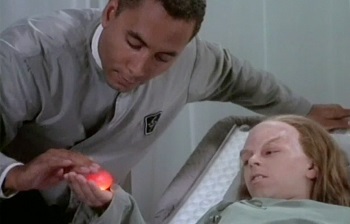 The avalanche has already started. It is too late for the pebbles to vote.
—Kosh

Shon, a young alien boy, is suffering from a respiratory ailment, which will eventually kill him if it is not treated. The only treatment involves a surgical procedure, which—according to his people's religion—will allow his soul to escape. So far, repeated requests to his parents to allow the surgery have been met with a firm "No." Franklin is beginning to get exasperated with their stubbornness, but suggests an alternate treatment, really a stalling method to get them to change their minds. To raise Shon's morale, Franklin gives him a glowing "gloppet egg, ("from the planet, uhh, Placebo"), which Franklin tells him needs to be stroked and spoken softly to.

Up in C&C, a distress call from starliner Asimov has just been received. They have had a fire in their navigation system and are now stranded in raider infested space. Ivanova is sent to lead a flight to escort them to safety.

Franklin has gone to Sinclair and is trying to get him to allow the procedure, whether the parents agree or not. Sinclair is hesitant, not wanting to set that kind of precedent. As it becomes clear the alternate "procedure" is not working, the boy's parents are becoming more agitated, but still won't allow surgery. Franklin formally requests Sinclair suspend their authority and allow him to proceed. Shon's parents also visit him and ask him to rule in their favor. Sinclair is in a difficult position; since they do not have an ambassador on station, Sinclair must fill that role himself, and as such he must look after the cultural and diplomatic needs of their people, but as commander of Babylon 5 he must consider the doctor's request as well. He is particularly concerned about B5 setting a legal precedent that a person's right to life outweighs their right to hold religious beliefs.

Fearing he will decide against them, Shon's parents begin asking the other ambassadors to intervene on their behalf. G'Kar sees no benefit for the Narn Regime in intervening, and refuses. Londo acts perfectly willing to help — for a price ("How much justice can you afford?"). Ambassador Kosh is just as helpful as he ever is, and Delenn, while she genuinely sympathizes, does not wish to impose her views on other cultures. She observes that they and Doctor Franklin both believe they are in the right, but asks how either of them can prove it.

In deep space, Ivanova's flight finds the Asimov but raiders are close by. They begin escorting the ship to Babylon 5.

Back on the station, Sinclair finds that the final word will be his. The ambassadors have all declined to intervene, and Earth Central has also not given instructions, which means whether or not the operation proceeds will be on his say-so. He decides to go and talk to Shon himself. Shon, who has figured out that the gloppet egg is really just industrial goo, asks Sinclair not to tell Dr. Franklin because "he thinks it's an egg." Shon says he doesn't want to die, but he doesn't want the surgery. Sinclair finally makes his decision: the operation will not take place.

Franklin is outraged and confronts Sinclair over the matter. The commander says that Jeffrey Sinclair the person would gladly order the procedure, but Commander Sinclair, the Earthforce officer and B5 commander, needs to look at the big picture, protecting the rights and beliefs of the alien races and Babylon 5's neutrality at the same time.

In Medlab, the family is gathered, father and mother bidding their son a tearful farewell. After they leave, Franklin decides to take matters into his own hands and operate anyway.

As the raider gets closer, Ivanova goes against orders and pursues it, trying to destroy it before it can alert any others. Just as she succeeds, a whole bunch of other raiders appear on her scanners.

Shon wakes up, and is surprised to feel much better, and even more surprised to feel exactly the same spiritually as he did before. His parents realize what has happened, however, and react with horror at his presence.

Later, Sinclair is berating Franklin for taking matters into his own hands when they are called down to Medlab. Shon's parents have arrived with a ritual traveling robe. They tell Franklin that they realize he only did what he thought was right, but that it still is not in their power to forgive him. They then leave, taking Shon with them.

Franklin seems pleased with what he's done, until later while researching their culture he finds an entry on that particular robe, and immediately runs to where the family is staying. Upon entering, however, he finds the parents kneeling beside Shon's body. His mother says, "Do not grieve, Doctor Franklin. This was not our son. This was only a shell. There was nothing to do but end the pain of the shell."

Franklin goes to talk to Sinclair again, who tells him he won't ask for his resignation... this time.

Ivanova managed to get away from the raiders, but her fighter was worked over pretty good before she did. She says sometimes things work out when you take an educated risk. Garibaldi counters that sometimes they don't, and begins telling her what happened while she was out.