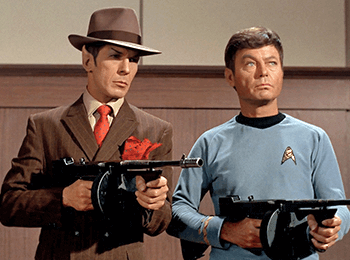 Someone did not get the memo.
Advertisement:

In this trope, the modern Main Characters of the work in question suddenly need to dress as if it's the Victorian Era, or Heian Japan, The Wild West or whatever.

It could be that they have to attend a Masquerade Ball without attracting attention to themselves, or that trace amounts of Time Travel have suddenly and inexplicably thrown them back to the era in question. Maybe they have to establish diplomatic relations with an alien race that is convinced they live in the 1920s. Whatever the reason, the main characters of the work dress up in recognizable, elaborate or anachronistic costumes that they wouldn't otherwise wear.

Note that while examples of this trope are predominantly historical costumes, time travel is not a requisite. It's any time the main characters dress in costume for the duration of an episode/scene/whatever, usually to blend in or deflect suspicion.