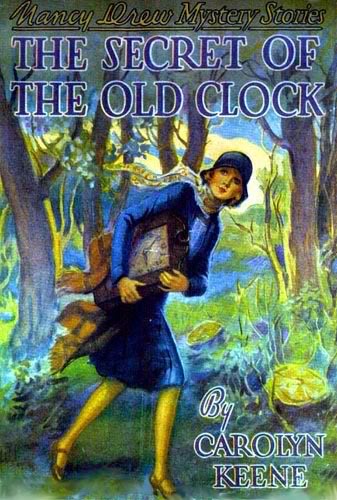 The book that started it all: The Secret of the Old Clock, the first Nancy Drew adventure, with its original 1930 cover art.
Ned said "Nancy Drew is the best girl detective in the whole world!"
"Don't you believe him," Nancy said quickly. "I have solved some mysteries, I'll admit, and I enjoy it, but I'm sure there are many other girls who could do the same."
— Nancy's Mysterious Letter
Advertisement:

The reigning queen of long-running franchises, Nancy Drew has been around in one form or another for over ninety years.

It started as a series of young adult mystery novels, the first of which was published in 1930 by the Stratemeyer Syndicate. The premise is simple enough: Nancy Drew is a young teenage girl, who alongside her friends Bess and George (and sometimes her boyfriend Ned Nickerson), solves mysteries. The original series ran from 1930 all the way to 2003, consisting of 175 books in total. A sequel series, Girl Detective, was published from 2004 to 2012, before being rebooted as the Nancy Drew Diaries in 2013. Along the way, a large number of spinoff book series of varying canon status were published. Between all the different series and spinoffs, the number of books totals at over four hundred, and still counting.

One of the most noteworthy traits of the original books is that the first 34 volumes were rewritten in the 1960s to reflect changing cultural values. This has produced mixed views; on one hand, this did get rid of a lot of racist stereotypes and other Values Dissonance issues that were in the original versions. On the other hand, the changes were also criticized for making Nancy herself less assertive, and simplifying the plots of many of the books (they were 5 chapters shorter). That being said, a large number of powerful and influential women, including politician Hillary Rodham Clinton, journalist Barbara Walters, and no less than three female current and former Supreme Court Justices have mentioned not only being fans, but inspired by Nancy to enter what were considered traditionally masculine fields such as politics, journalism, and law. As a result, feminists tend to have a love/hate relationship with the franchise.

Besides the books, there have been quite a few other adaptations. In the late 1930s, there was a series of four film adaptations, which were widely criticized at the time for being campy and In Name Only (and have mostly been forgotten since). In 2002 there was a television movie, and in 2007 there was a more tongue-in-cheek film adaptation, poking fun at the 1950s incarnation of Nancy. Another one went the modern high school mystery/comedy route in 2019. There were two prior television series starring Nancy; the first in the late 70s, the second a 1995 series canceled after half a season. A third series, centered around an adult Nancy as a police detective, was announced in late 2015, although ultimately never greenlit. A few years later, another TV series, Nancy Drew (2019), successfully made it to air, with Nancy, now 18, investigating a Twin Peaks-esque small town murder mystery ... and also Paranormal Investigation. A series of Nancy Drew point-and-click Adventure Games has been in production since 1998. More recently, a comic book series was published by Papercutz, starting in 2005. There has also been occasional lines of merchandise throughout the decades.

With the variety of media and the sheer popularity of the franchise, Nancy Drew will likely be around for decades to come.

Works in this franchise (dates of publication/release are in parentheses) include:

Little did Nancy know that she would soon be confronted with a mystery that would truly baffle her, in The Secret of the Franchise Index.