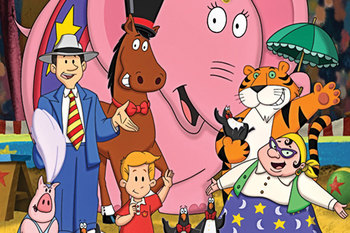 Marvin The Tap-Dancing Horse is a Canadian animated Preschool Show produced by Nelvana for Teletoon and PBS Kids. It is based on a children's book by the mother-son team Betty and Michael Paraskevas, the same duo behind Maggie and the Ferocious Beast, another preschool Nelvana cartoon produced in association with Teletoon. Like with Maggie and the Ferocious Beast, the Paraskevas were both involved in the production of this show and served as executive producers.

The show tells the story of Marvin The Tap-Dancing Horse, an equine performer who works at a circus and carnival run by Fast-Talking Jack. A seasoned artist who has danced on stages across the world and for countless people, Marvin is joined in his line of work by a number of fellow circus animals, namely an irritable tiger named Stripes, a gentle elephant named Diamonds, and an emotional pig named Elizabeth, as well as resident carnival fortune teller Edna. However, Marvin's best friend is 9-year-old Eddy Largo, who was hired by Fast-Talking Jack to help around the circus when he came around looking for a summer job (so he wouldn't have to attend "Office Camp" like his dad wanted him to). Alongside their fellow carnival employees and performs, Marvin and Eddy always find adventure to be had around the circus.

It originally aired on Teletoon in Canada and on PBS Kids as part of their Bookworm Bunch, running for 2 seasons and 26 episodes. Reruns of the show later popped up on Qubo in the United States.