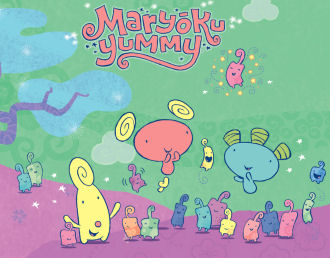 Maryoku Yummy is a TV show aimed towards preschoolers. The show takes place in Nozomu, a fantastical world where all children's wishes go to be granted, populated by the colorful 'Yummies.' Created by American Greetings, the series is based on a rather obscure series of greeting cards dating back to 2001.

Gentle and understanding Maryoku is a wishsitter, who watches over wishes with her friends Fij Fij and Ooka. In the US, it aired on Discovery Family's former preschool block HubBub.