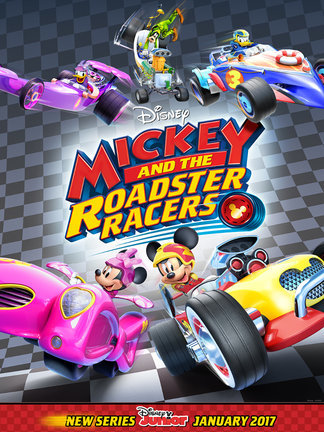 Mickey and the Roadster Racers is a Disney Junior show that premiered in 2017. It focuses on the Sensational Six characters (Mickey, Donald, Goofy, Minnie, Daisy, and Pluto) living in Hot Dog Hills and racing customized hot rods. On the side, Minnie, Daisy, and Cuckoo Loca run a business called Happy Helpers, where they help out others in need.
Advertisement:

The show was renamed Mickey Mouse Mixed-Up Adventures for its third season, which premiered on October 14, 2019. You can find the premiere

The show acts as the spiritual successor to Mickey Mouse Clubhouse. The two key differences are that episodes are composed of two 11 minute segments instead of one 22-23 minute story, and there is no Fake Interactivity.

The show's third season ended on October 1, 2021. It is unknown if the show will be renewed for a fourth season at this time, but it was succeeded by Mickey Mouse Funhouse.