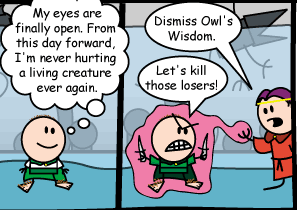 Characters are known by the qualities that make up their personalities. It's who they are. In a Flowers for Algernon story a character either:
Advertisement:

In the Trope Namer short story Flowers for Algernon by Daniel Keyes (later expanded into a novel), it was a side effect of the imperfect procedure that granted the intelligence in the first place. In the story, the main character, cognitively disabled Charlie, undergoes a surgery that boosts his intelligence. To an astounding degree, as it turns out: his intellectual breadth and knowledge allow him to learn languages of all kinds, science of all branches, surpassing even those that performed the operation. Charlie, though, finds that his intelligence isolates him just as much as his dimness did before it.

Done poorly, this is a message that being smart or even above average will make you unhappy and insufferable, and the only way to have friends and be acceptable is to be at (or below) their own level. Ignorance is bliss, knowledge is misery. Sadly, this is sometimes Truth in Television, as many geniuses do experience feelings of isolation. Note that how bad the Aesop is depends on how willing the characters are to go back to their former selves and how much the return was based on their own actions. If the character's friends force them to give up their improvement against their will, or if the character seeks to lose it because of mistreatment from others, then it can leave a very bitter taste in viewers' mouths.

Done well, this is about accepting your limitations and making the most of what you have instead of relying on artificial enhancements.

The polar opposite of Brought Down to Normal and Can't Stay Normal. If the character elects not to accept themselves and overuse the Applied Phlebotinum, you may have a Fantastic Drug situation on your hands.

See also We Want Our Jerk Back!, Compressed Abstinence, Tall Poppy Syndrome, Loss of Identity. Compare Pygmalion Snap Back. Sister Trope to Dumbass No More, in which a character gains intelligence permanently.

Alternative Title(s): The Algernon Gordon Effect, Smart For A Day