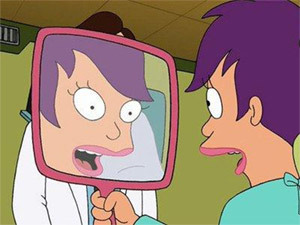 Leela meets another former orphan from the Orphanage, Adlai Atkins, who has become a plastic surgeon. He offers to give her two eyes so she can appear normal, a chance Leela leaps on, to Fry's dismay. Meanwhile, Bender adopts all of the orphans to get the stipends from the government, but finds child-rearing to be a more costly venture than he figured.