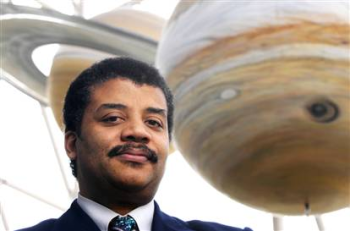 "We are all connected to each other biologically, to the earth chemically, and to the rest of the universe atomically. That’s kinda cool!"
"If you are scientifically literate, the world looks very different to you. There's a lot we understand out there, and that understanding empowers you."
Advertisement:

Director of the Hayden Planetarium at the American Museum of Natural History in New York City, Doctor Tyson is one of the scientists (along with Brian Cox, Phil Plait, Michio Kaku, Stephen Hawking and several others) who have taken up the task, largely pioneered by Sagan, of bringing easy-to-understand science to the general public. He hosted PBS's science series Nova ScienceNow (spinoff of Nova), has written multiple books (all easily understood by laymen) about astrophysical phenomena, and is a frequent guest on The Daily Show, The Colbert Report, and Jeopardy!. He also runs the Star Talk radio show, in which he and guest speakers discuss astronomy, science and science-fiction (often Lampshading Artistic License – Physics). It has also been adapted to television on National Geographic Channel.

Dr. Tyson was the primary driving force behind the demotion of Pluto from "planet" status to "dwarf planet" status, based on his view that Pluto is only one of thousands of Kuiper Belt objects that have been discovered (an action he has admitted has brought him "a lot of hate mail... mostly from children"). Although when challenged about why Charon wasn't promoted to make it and Pluto collectively a dwarf double-planet, he conceded that Charon is too large relative to Pluto to be considered a mere moon.

In addition to his scientific endeavors, Tyson is a dancer (he won a gold medal in an International Latin Ballroom competition), a wrestler, a collector of fine wines, and a model rocketeer. In collaboration with Richard Dawkins, he's also opposed the Intelligent Design Movement

and their attempts to include religious-inspired pseudoscience in school science curricula.

He has argued more than once that a society that isn't scientifically literate is a society without a future. To that effect, he has personally funded scholarships for students who seem especially bright and science-minded out of his own pocket. As an example: during a question-and-answer period at one lecture, a fourth grader asked Dr. Tyson, "What would happen if a black hole collided with another black hole?" Tyson was astounded by the question, and the boy now has a full scholarship to the university of his choice waiting for him. Dr. Tyson claims that he feels he has a duty to "pay Carl Sagan back" for the care and attention Dr. Sagan gave him

while he (Tyson) was "just a high school student who wanted to be an astronomer".

And best of all, he is One of Us. His lectures frequently reference science fiction movies (he's especially a Star Trek fan) and comic book characters (he collects Superman, Green Lantern, and the Justice League of America), and helped DC Comics name the star that Krypton orbits

in Batman v Superman: Dawn of Justice. He provided the title for the Symphony of Science songs Onward to the Edge

and We Are All Connected

, and appears in the videos. He appeared in season 4 episode 7 of The Big Bang Theory as well as in season 5 episode 16 of Stargate Atlantis. And as Sagan's successor, he hosted Cosmos: A Spacetime Odyssey series. He even guest narrated on CinemaSins' Everything Wrong With series to help provide scientific inaccuracies with the films, Gravity, Interstellar and The Martian. He plays Waddles the pig on Gravity Falls when he becomes hyper-intelligent (Waddles is normally "voiced" by Dee Bradley Baker). Something of a recurring character in Future-Worm! and cameoed in the season 8 Halloween Episode of Regular Show. He's also the voice you hear at the end of the song "Exist" in Avenged Sevenfold's 2016 album The Stage.

He has been criticized by some for being a little too casual with facts when presenting popular science. On one occasion, he misattributed a quote to George Bush and argued that Bush was disparaging Islam (here's a summary of the controversy

). In another case, critics argued that his series Cosmos: A Spacetime Odyssey oversimplified the case of Giordano Bruno

to make it a cartoonish story of good scientist vs. evil church. He has also gotten some flak for being too condescending, pretentious, or insensitive at times, especially on his Twitter—one notorious example saw him state that more people die of the flu than from shootings

, shortly after a widely publicized shooting in El Paso. Regardless, he's done quite a lot for both the science community and the public, so it can be argued he's earned his spot on the shoulders of giants.

[tosses hands up] "Watch out, we got a badass over here!"