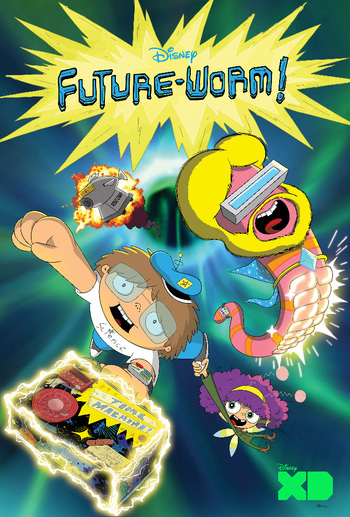 One boy, one worm - these are their adventures...
Advertisement:

Future-Worm! is an animated series on Disney XD. It was created by Ryan Quincy, who previously directed another animated series; Out There, for IFC. Originally a series of shorts, the show premiered on August 1, 2016.

Young yet talented inventor Danny Douglas (Andy Milonakis) has just created a time machine in the form of a lunchbox and sent it on a journey through time, and on its maiden voyage, things were going well... until a small mishap occurred! Future scientists discovered this lunchbox — and utilizing its compact size, sent the mysterious Future-Worm (James Adomian) - a worm equipped with a photo-receptor visor, titanium-reinforced abs and a bulletproof beard — back into Danny's time, where he befriends Danny, changing his life forever as the worm dedicates his whole life to ensuring Danny never has a boring day. The series focuses on the bizarre adventures of the two unlikely buddies as they travel into the past, future, and countless other places, often with the help of their friend Bug, (Jessica DiCicco) a young engineer, and sometimes Danny's parents as well.