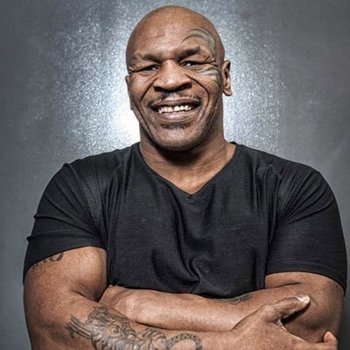 Iron Mike. Kid Dynamite. The Baddest Man on the Planet.
"I'm not Mother Teresa, but I'm not Charles Manson, either."
Advertisement:

Michael Gerard Tyson (born June 30, 1966) is a retired heavyweight boxer, media personality, pigeon lover and general odd duck, known for being the youngest ever heavyweight champion of the world at twenty years old, a record he still holds to this day.

Tyson's life is generally split in into three parts. His complete dominance of the boxing world (1985-1991), his fall from grace after a series of lawsuits and legal troubles (involving multiple stints in jail for rape, assault and battery, cocaine possession, and driving under the influence) which coincided with his dominance fading as better opponents stepped on to the scene (1991-2005), and his eventual reemergence as a bizarre media darling with occasional acting gigs. Speaking of the latter, he is quite frequently cast as himself, and stars as a nuttier version of himself on Mike Tyson Mysteries. He also hosts the Hotboxin' with Mike Tyson

video podcast where he interviews musicians, celebreties, boxers and MMA fighters alike while smoking them under the table. Oh, and he had an infamous moment when he bit off Evander Holyfield's ear.

The HBO movie, Tyson, tells the story of his rise to fame and (initial) fall from glory. He is the Trope Namer for The Tyson Zone (though the term itself was coined by The Sports Guy) because of all the aforementioned scandals.