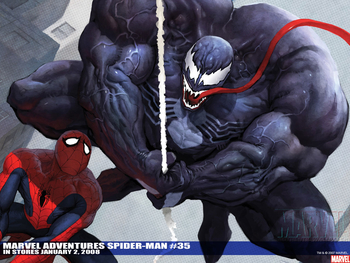 And what they mean is ass-kicking.
UGO report: Then, Tatsu allegedly stomped across the kitchen and proceeded to open up a can on Sheamus, with some reports even characterizing the beating as bad enough to elicit tears from the future WWE Champion.
Drake Oz: Let this be a lesson to you, folks: Size doesn't matter... unless you want to get pushed in the WWE.
— 20 pieces of WWE trivia that are just weird enough to be true.

In works of fiction, it is generally assumed that characters with big muscles must be strong. In most media, this compels creators to depict strong characters as with hulking muscular builds, often disregarding what kind of build people in any given activity would be likely to have, for fear not doing so would risk forcing the audience out of the story.

This frequently carries the opposite meaning too: small characters are usually elusive, quiet, agile, stealthy, and quick, while large characters being such will not be believable.

In Professional Wrestling, this is taken to extremes. Few fans will accept a smaller or average sized wrestler as a main event contender without years of development, whereas larger wrestlers may be advanced to the main event scene almost immediately after debuting. Fans and promoters alike also tend to gravitate toward men with large biceps and pectorals over triceps and the core body because the former look better on camera, even though the latter are more useful for wrestling.

It should go without saying that this is Truth in Television. Combat sports have strict weight classes for a very good reason, after all. Even ten pounds of muscle is considered a huge advantage.

Related to Bishounen Line. Polar opposite of Muscles Are Meaningless. The Giant will always be portrayed this way, even if they're mostly fat.