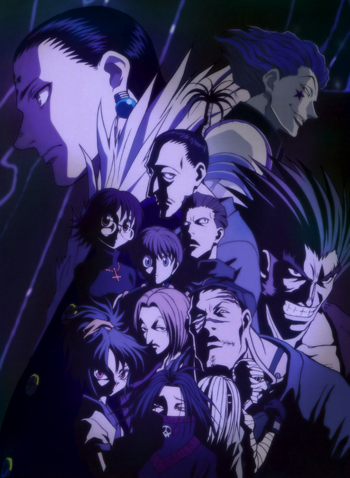 "We reject no one, so take nothing from us."
— Meteor City's mantra
Advertisement:

Introduced as "the most horrible group of criminals in all history", they are a group of 13 thieves who specialize in very difficult targets. Unlike most other thieves, they generally don't rely on subtle strategy or minuted actions; perpetually reenacting the Gordian Knot parable, they prefer to resort to brute force. Loads and loads of brute force. Which is why they get such a reputation: They are less famous for what they steal than for the hundreds of people they kill in the process. In fact, as they already steal all the common objects they need on a daily basis, they have very little interest in the luxury items they target, and seem to chose them mostly because they know these items will be heavily guarded. Indeed, most of the members seem to be in specifically for the carnage.

They have a peculiar organization, being villainous True Companions of Ubermenschen (this doesn't go without the occasional internal frictions, though they have strict rules about settling those), and while they have a leader, the survival of individual members (including the leader) is not a priority; the survival of the group as the whole is. If a member dies, they simply get replaced.

The group is often referred to as "The Spider", because of the 12-legged spider tattoos that mark their membership. 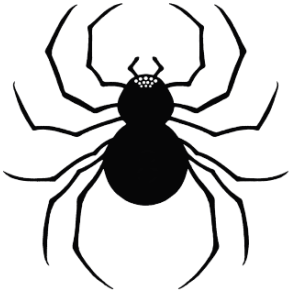 The leader of the Phantom Troupe, a mysterious, very intelligent and dangerous man. He has the ability to steal the nen powers of others, and keeps them in a book to draw forth with at any time.

One of the founding members of the Phantom Troupe. She's able to give her aura the form of a thread, which she then uses variously for fighting, keeping track of people or objects, Vertical Kidnapping, using corpses as puppets, and reattaching severed limbs with great efficiency. Hisoka seems to like her a lot, much to her displeasure.

A rather unpleasant fellow, initially introduced as the Torture Technician of the group, much later revealed to be also one of its top fighters. A sadistic, self-centered jerk with little patience, who respects only force and has yet to show any redeeming human quality. One of the founding members of the Phantom Troupe. His nen ability is to summon a suit of protective armor called "Pain Packer" that shields him from a number of explosive abilities, which are charged by his pain.

He along with Phinks are shown taking a de facto leadership role in some scenes where Chrollo isn't present, and seems to take a "What Would Chrollo Do?" approach to decisions. This may be foreshadowing to his later officially becoming temporary leader while Chrollo is indisposed. 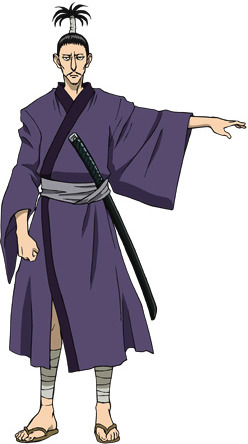 One of the founding members of the Phantom Troupe, Nobunaga dresses and acts like a Toshiro Mifune's Samurai character. He was more than just best friends with Uvogin, and consequently didn't take the latter's death too well. He seems to see Gon as a Replacement Goldfish, but Gon isn't too happy about that. 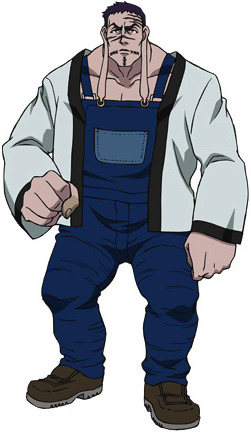 The seventh and last founding member of the Phantom Troupe, Franklin is an intimidating looking giant, and has the ability to fire powerful Nen bullets from his fingers, at machine-gun rate. He really enjoys himself in battle, but has a more subdued and friendly personality the rest of the time.

Shizuku is 19 years old, though she seems much younger mentally. She's quite absent-minded and very forgetful, and also considered rather weak in terms of fighting abilities in the Phantom Troupe (even though for most people outside of it she's a dangerously empowered little girl). However, she has an interesting Nen ability: she can materialize a cartoonish-looking, seemingly sentient vacuum cleaner named Deme-chan, (Blinky in the English translation), essentially a weapon that sucks combined with a Bag of Holding, as it can suck up almost anything, regardless of its size, with an apparently infinite storage capacity.

An ordinary looking guy, at least in his normal clothes, which resemble a jogging outfit. Phinks is often seen in his pharaoh-like headdress, used for ceremonial purposes in his country of origin. He is easily excitable and seems downright euphoric when he kills a nen fighter. His ability is a wind-up punch: He can charge up an arm by spinning it; each full circle will increase the power of the subsequent punch. He used this punch to kill the top bodyguard in Kurapika's group. Phinks accompanied Feitan into Greed Island and went on a killing spree. He tends to take Leadership of the Spiders when Chrollo is not around making him the unofficial underboss.

He later comes up with the idea for Zazan's killer to take temporary leadership of the Spiders, despite Feitan wining the contest Phinks still makes most of the decisions for the group. 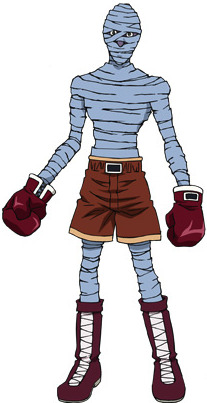 Bonolenov comes from the Gyudondond Tribe, where villagers chosen to do battle will have holes punctured throughout their bodies. This allows them to become living woodwind instruments, making music by dancing. The tribe has a unique nen application where they infuse the air or the melody, allowing them to summon things to fight on their behalf. Bonolenov is normally wrapped up in bandages from head to toe; he will remove those bandages when he has to fight. His known summons are Prologue, a masked jungle warrior, and Jupiter, a round boulder with planet Jupiter's pattern on it. (Whether this refers to Gustav Holst's "Planet Suite" is unknown.) Bonolenov believes himself as a noble warrior and speaks in a formal, polite manner, even when insulting someone. He was most recently called back to Meteor City to help defeat the Chimera Ants that had set up a hive there.

There's The Brute. There's the Implacable Man. And then, there's Uvogin, the Anthropomorphic Personification of brute force. He can stop an anti-tank rocket with his bare hand, hit back with the force of a small missile, and takes lot of pleasure in smashing his opponents to bits, literally. His Nen ability is to enhance his entire body to deal damage based on what he enhances, like enhancing his voice to scream impossibly loudly. One of the founding members. Also the first member of the Phantom Troupe to be killed by Kurapika.

Not a very good fighter by the Phantom Troupe's standards, Pakunoda is in for her extremely useful ability to read the memory of people she touches. She's outwardly calm and confident, but seems to be more caring than she's willing to admit. One of the founding members. She was the next one to fall to Kurapika, but not in battle, but because she defied his Judgement Chain and martyred herself for the sake of protecting the rest of her fellow Troupe members.

Shalnark is a young man and one of the original Meteor City inhabitants. He is kind of a distant fellow, both in his approach to life and in the way he fights. He is always thinking about something somewhere; this is how he was able to deduce Greed Island's nature. His weapon is a cell phone: By sticking an antenna on somebody, he can control his or her movements, and also dialogue through texting. Naturally, he sits back in a safe area while doing this. By sticking an antenna onto himself, he gets greatly increased strength and speed, but he can control his movements only by inputting them into his phone, he can't remember what happened, and he's rendered unable to move for days. Shalnark serves as the technical expert of the organization; when there is a problem with electronics, the other members turn to him. Isn't seen after the Chimera Ant arc, but seems to have had his powers stolen by Chrollo. 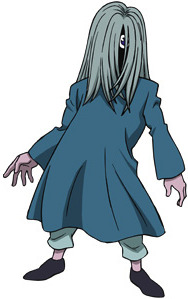 Kortopi is a short, small fellow with a childlike voice and maybe demeanor too. His hair is so long, it normally covers his entire body and goes down to his ankles, making him resemble Cousin It from The Addams Family. When he needs to express himself, he parts his hair to reveal an eye. Kortopi is a quiet fellow, with no speaking lines except for one scene. He is subservient, rarely acting on something without orders from someone else. Kortopi can duplicate anything he makes physical contact with and copies every last detail. The Spider organization normally sells off the counterfeit or to throw off pursuers. While Kortopi can make clones of people, they will be limp, lifeless bodies. He also cannot duplicate items infused with Nen, as he discovered trying to duplicate a Greed Island card. Kortopi is physically the weakest of the group. While he has endured one of Pakunoda's bullets to the head, he has not shown any combat capability. He allowed his powers to be taken by Chrollo and as a result was beheaded by Hisoka.

Omokage is the main villain in the movie Phantom Rouge. He was originally the #4 of the Phantom Troupe, but he was replaced by Hisoka. His only reason for joining the group was to create Soul Dolls of the group before leaving them. After Uvogin's death he decides to take his eyes which catches the attention of his former group along with Kurapika and Hisoka.