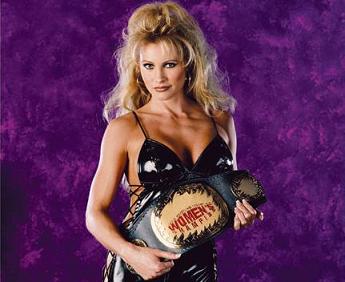 Sable as WWE Women's Champion.
"This is for all the women who want to be me, and the men who come to see me!"
Advertisement:

Rena Marlette Lesnar (née Greek, born August 8, 1967), better known as Sable, is an American model, WWE valet-turned-Diva, and one of the faces of the company's so-called Attitude Era along with "Stone Cold" Steve Austin.

She debuted in 1996 as a valet to Triple H and her (largely forgotten) then-husband, "Marvelous" Marc Mero, and had an immediate effect on the fans. Whereas Mero's career stalled as the result of injury, Sable's star continued to rise in his absence. Within a year she had become hugely prominent, with WWE reviving their women's division and building it around her, even though she was not a wrestler herself.

This described arguably started the trend of placing looks over wrestling ability in WWE. Regardless, she is recognized as a mighty ratings weapon in the Attitude Era and the prototypical WWE Diva — although technically Tammy Lynn "Sunny" Sytch and Terri "Marlena" Runnels were playing the Diva archetype before Sable arrived in WWE, and Terri was the one to first use the word on television, though never really credited for it. Sable was a 1x WWE Women's Champion

She and Brock Lesnar married in 2006; the couple have two sons. She is not to be confused with the IWRG\CMLL\AAA Luchador of the same name.