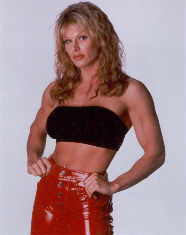 Terri Poch (born August 20, 1964) is a retired American Professional Wrestler, manager and trainer from Portland, Oregon known for her work in the early 1990s as Terri Power and for WWE from 1998-2001 as Tori. She started her career as Taylor Made Medina, the valet for Scotty the Body (Scott "Raven" Levy) in NWA Pacific Northwest Wrestling in 1988. She made her in-ring debut in 1990 as Terri Power in the LPWA, as well as competing in various women's independent promotions. She competed there until the promotion closed in 1992, and then switched to All Japan Pro Wrestling before taking a hiatus in 1993. She returned to wrestling in 1998 when she became Tori. Her original character was as a "fan" of Sable, which ended when Sable rejected her. Tori then went into a feud with Ivory over the WWE Women's Title

, which included them competing in the first-ever hardcore match for the title on the September 6, 1999 Raw. She then became Kane's unstable girlfriend, which ended when she turned heel on him and joined DX. That lasted until King of the Ring in June 2000, when The Dudley Boys powerbombed her through a table. Her last onscreen role was as Raven's masked ninja woman, which was interesting since her first-ever role in the business was as Levy's valet. She was one of the trainers for the first season of WWE Tough Enough. She retired after her departure from WWF. She is a 1x LPWA Champion