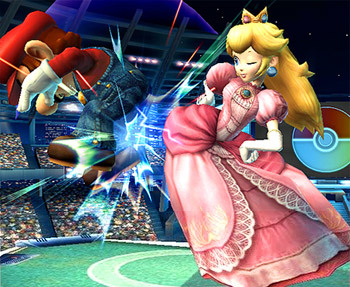 Princess Peach's pretty pink posterior promptly pummels portly plumber.
Master: Fight back! Resist the ass!
Craig: How can I resist an ass so great?
Master: It is only an ass. You must overcome the ass with your mind.
Craig: This ass is unlike any I have ever encountered, Master!
— South Park, "Tweek vs. Craig"
Advertisement:

When Soviet badass, Ass Kicks You.

A battle trope. Perhaps to further humiliate the opponent, sometimes, even an ass becomes a viable weapon. So what you do is basically face back, bend your waist forward, and then jump backwards. And make sure your ass lands on the enemy. If you land in their face, that's much better. Or alternatively, do this while your enemy is down. Stomp them with your ass. In Video Games, this is often the form taken by the Ground Pound.

Believed to have originated in Japanese professional wrestling, where this has been a staple move since at least the late '80s. Thus, this trope may or may not overlap with Wrestler in All of Us. In video games, this is usually more utilized by female characters, as it can be used in a cutesy way, sometimes accompanied with a cutesy "BOING!" sound. When it comes to males, it is usually the bigger/fatter ones who utilize this in battle (and hygienically, they are not portrayed to be the best). More generally, this move can just be a basic attack for characters with prominent lower bodies.

If you like Toilet Humour (or just want to add insult to injury), fart while you're at it. Or take it one step further. Not guaranteed to happen, though.

See also Butt Sticker, Butt Cannon, and Literal Ass-Kicking. Compare Belly Flop Crushing for when you use your gut rather than your butt. This trope is not related to people who kick ass elsewhere being in Soviet Russia... aside from being clearly named in that manner. Nor is it related to particularly kick-happy donkeys. Can overlap with Cherry Tapping.

This trope could have been called "Butt Butt",note as in "weaponizing a living butt the same way you would weaponize a gun butt" but that's way too lame a pun even for this site.

Not applicable when the other meaning of ass kicks you. However, see Horsing Around.