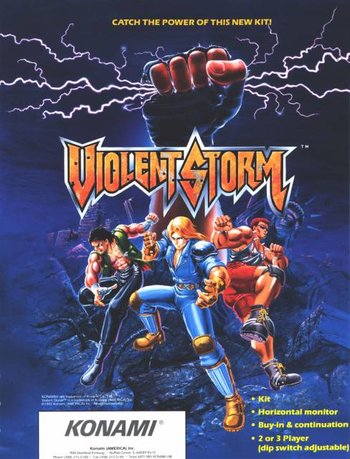 Who'll be the hero?
Advertisement:

Violent Storm is an arcade Beat 'em Up made by Konami released in 1993, and their final foray into the genre along with Metamorphic Force.

In an unspecified future, the world is recovering after World War III destroyed most of it. The main characters Boris, Wade, and Kyle are a group of vigilantes protecting the innocents from thugs, the most dangerous being the "Geld Gang". One day, their friend Sheena is kidnapped by a member of the Geld Gang and thus they go on a Roaring Rampage of Revenge to save her. But really, who cares for the plot in a game like this?

Konami's farewell to the beat'em up genre, this arcade release features superb graphics with huge, fluidly animated sprites, an insane lyriced soundtrack and an impressive variety of moves. Though it may look like a blatant ripoff of Final Fight at first, that's really the point as it celebrates the classics of the beat-em-up genre as much as it makes fun of them, makes many improvements on the formula anyway, and overall is just a very finely crafted example of its genre and all it entails.

See also Crime Fighters and Vendetta!, Konami's previous beat-em-ups with similar themes. Some consider Violent Storm as the final installment of a trilogy that includes these games (incidentally, there was a two year release gap between all three), although it was never advertised as such.

Advertisement:
I'm gonna get you eventually,
everybody wanna knock Geldo down!
I'll go straight to Sheena (Sheena),
...and-I'll-be-there-yes-I-will!
This world is very difficult,
but I got nothing to lose now!
There's no defeat, you'd sooner die!
Challenge the beginning of the end!
Until I rescue Sheena,
I'm never gonna stop! (Feel my power!)
Now I spend my time fighting all around!
I'm a tough guy! (Do them in!)
You think you can beat us,
We got the look! Oh so fine!
Just wait I'll get even with you!
GET IT ON