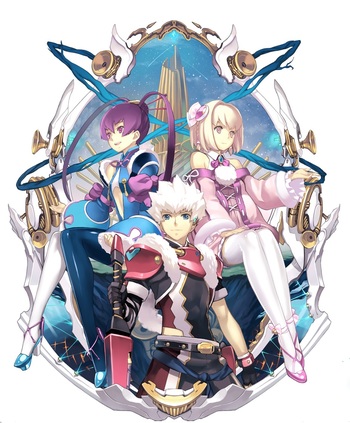 The third game in the JRPG Ar tonelico series and its overarching EXA_PICO franchise by Gust is called Ar tonelico III: Sekai Shuuen no Hikigane wa Shoujo no Uta ga Hiku (The Song of the Girl that Pulls the Trigger of the End of the World) in Japan. Nippon Ichi released this game under the name of Ar tonelico Qoga: Knell of Ar Ciel in North America on March 15, 2011, with Qoga meaning End in Hymmnos.

This time around, the protagonist is a young steeplejack named Aoto, while the setting is the region of the third tower of Ar tonelico, Sol Cluster, where Reyvateils hold high importance over the second-class humans and control their population, destroying entire human cities when they become too large in a genocidal process called Cleansing, while the survivors are turned into vegetables through a brainwashing process called Purification.

The story starts with Aoto lazying around during his work hours, when a rumble outside his house makes him notice that an old man and a woman are being attacked by Clustanian troops. After helping the woman to fend the Clustanians off, the woman transformed into other girl: Saki, while the old man died from the wounds he sustained, telling Aoto to take care of Saki and giving him a mysterious pendant that looked identical to one Aoto had, telling him to give it to his son. During their run to the air bus station to escape from the village now they were being chased by the Clustanians, they met with a friend of Aoto's, Tatsumi, who helped them escape, not before Saki made her own clothes magically disappear and used some sort of weird power to turn the soldiers and robots into giant pieces of cake. While this leaves them astonished at first, they take advantage of it as a chance to escape from the village. Once they stop to rest outside the village, Saki, now with her clothes again, awakens without any memories of what happened in the village or who the old man that died protecting her was, making Tatsumi suggest taking her to a Reyvateil-specialized doctor that lives in the neighboring city of Eternus Shaft.

However, this only marks the beginning of a long journey where they befriend other characters: Hikari Gojo, the good-natured doctor Tatsumi mentioned; and Finnel, a clumsy Reyvateil waitress that lives and works at the Eternus Shaft. Both of them seem to be keeping some secrets of their own, which Aoto and the others will discover as they fight to find the truth behind Saki's memory loss, the fact she and Finnel have multiple personalities that change their appearances entirely, why Clustania is so keen in capturing her, and the connection she and Finnel have with some incidents that happened in Sol Cluster's past; while protecting them both from Clustania and the human-ruled nation of Archia, the second of which seems to have ulterior motives. This will also take him to discover why the Third Tower was created originally and what were its functions, getting into an adventure that will decide not only Sol Cluster's fate, but also that of the entirety of Ar Ciel.

The game later on got small sequels in the form of Drama CDs, each one giving an ampler outlook on the endings of each individual heroine, while also pulling out a final sequel for the entire series in the form of two light novel tomes in which the casts of the three games join to accomplish a single goal.