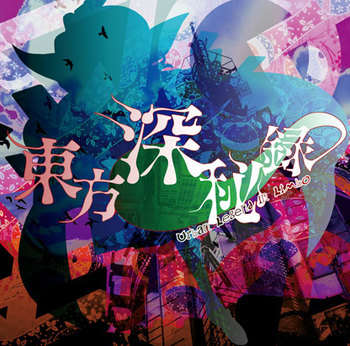 Urban Legends from the Outside World have started to materialise in Gensokyo - from old Ghost Stories to Conspiracy Theories to Creepypasta, they comprise entities and phenomena more fleeting but more unpredictable than a youkai. They are soon followed by the Occult Balls - strange stones that allow one to harness and amplify the urban legends' power. It's said that bringing together seven balls will cause something good to happen... but mysteriously, no one can agree on what's supposed to happen or where the stories came from. That night a cloaked figure appears from thin air near the Hakurei Shrine, overflowing with the power of the occult, and when Reimu attempts to fight it she gets knocked out...

Built on the engine of the previous aerial Fighting Game, Touhou Shinkirou ~ Hopeless Masquerade, ULiL features a modified flight system - rather than moving freely, there's a midair "floor" line from which characters can jump up or down. The popularity mechanic is replaced by Mystery Spots - stage-warping phenomena that spawn an Occult Ball which can be collected to power special Occult Attacks. More gameplay information can be found on the wiki

The game has two official websites (both in Japanese): for the PC version

and for the PS4 version