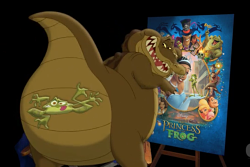 Naveen has seen things he wishes he couldn't have.
Advertisement:

Subtrope of Joke of the Butt. Compare Ass Kicks You and Sleep Squashing. Not to be confused with Blush Sticker.