Western Animation / Back at the Barnyard 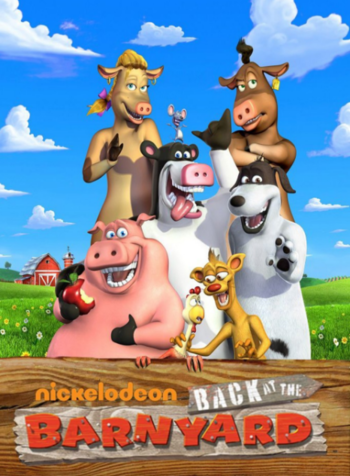 Back at the Barnyard is a Nicktoon from the producers of Jimmy Neutron. It premiered on Nickelodeon on September 29, 2007, and it ended on November 12, 2011. Based off the 2006 movie Barnyard which features the same characters from the film, though the series seems to follow a different continuity than that of the original movie (and replaces at least one of the characters from the movie).

The story centers around Otis, the cow in charge of running the barn, though something of an Ensemble Cast provides enough chaos to keep a steady stream of entertainment flowing through two seasons (with each consisting of 26-episodes). Otis regularly deals with scams gone awry originating from his friends or (more commonly) himself. Other instances have him functioning throughout the human world incognito or dealing with the supposedly psychotic lady who lives next door to the barn who knows they can talk and wants to expose them to the outside world.

Nickelodeon apparently didn't think the show was doing good enough for their standards, so they dropped it to Nicktoons Network during its run, where the remainder of the episodes were broadcast. While the show was getting good reviews, it never really became that popular, but it's safe to say that this show gave it its best.

Back at the Barnyard provides examples of:

After Freddy and Peck accuse him of being a space alien, Bingo tries to prove he's from Earth by revealing his immunization records tattooed on his butt.

After Freddy and Peck accuse him of being a space alien, Bingo tries to prove he's from Earth by revealing his immunization records tattooed on his butt.