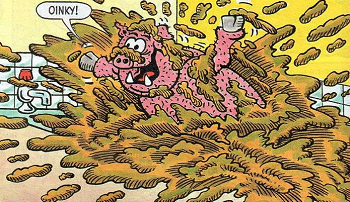 There's one thing most people know about pigs: they are messy as hell. In times past, in some rural 3rd-world areas, pigs would even consume the waste from the outhouse.note It was Fair for Its Day; it solved the problem of eliminating waste (similar to how in other places, the pigs were fed not bodily waste but garbage), and the pigs got food and shelter. This Animal Stereotype is so prominent, it lead to pigs being almost invariably portrayed as filthy dirt-lovers.

Actually, pigs are instinctively clean animals, but their habit of rooting the ground and rolling in whatever moisture is available creates messy results in confined spaces. Despite not having that much hair, pigs aren't able to sweat, meaning that they have to roll around in cool and damp places frequently to prevent themselves from suffering heatstroke. Also, thanks to their omnivorous instinct to probe and explore everything around them for traces of food, pigs love to make a mess by chewing things to bits and rooting around in the pieces. Rotten wood, sofa cushions, or especially straw are bound to wind up in a million tiny fragments when a pig can get at them. For a human observer, such behavior creates a strong impression of a messy, dirty, unhygienic animal.

There is also quite a common subversion of this trope: when the pig is obsessively clean, proper and hygienic, in a somewhat exaggerated way. Note that to count as a subversion, the pig shouldn't just be clean; tidiness should be one of the main defining traits of its personality.

There's also the so-called Babe Syndrome: the tendency of city folk who have never seen a live pig in the flesh to think that pigs are small and cute and pink and make good pets. While pigs are very intelligent and can be trained to do tricks and such, the average barnyard porker isn't particularly cuddly. They can also weigh up to a few hundred pounds and occasionally be quite aggressive. There are a few breeds bred specifically as pets, such as pot-bellied pigs, but even these require specialized care that most people cannot meet.

For non-porcine characters who are messy as pigs, see The Pig-Pen. For another common pig-related trope, see Gluttonous Pig (and its Darker and Edgier subtrope, Fed to Pigs), along with Brainy Pig. For a trope related to boars, pigs' big and scary cousins, see Full-Boar Action. For pigs being figuratively dirty, see Perverted Pig.