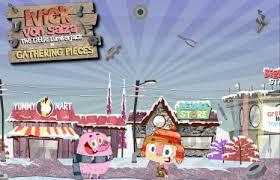 Ivick Von Salza: The Little Lumberjack is an animated series by Leo Trinidad.

Ivick is a young boy who lives with his father, Vigoras, and his pet pig, Malta, in a town up in the frozen north. The show follows Ivick's adventures as well as those of his family and what they get up to.