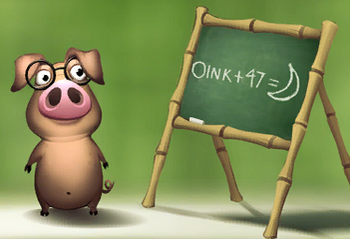 We win these!
"I told you pigs are smart."
— Gussy, Charlotte's Web
Advertisement:

Pigs are smart. It's one of the Stock Animal Facts. Biologists have speculated that the average pig is slightly more intelligent than the average dog. Fiction has latched onto this and exaggerated it, leading to the Animal Stereotype of the Brainy Pig.

If the pig is anthropomorphic or can talk, expect them to have Geek Physiques and be scientifically-minded, philosophical, Big Fun, or a combination thereof. If they're just a normal pig, they might show an understanding of human languages, or be able to do amazing tricks.

Usually, the Brainy Pig will be portrayed sympathetically, though they may be a deceptive schemer or an Insufferable Genius. The Brainy Pig is less likely than less intelligent pigs to be a Messy Pig, Perverted Pig, or Gluttonous Pig, though it can happen. See Full-Boar Action for another trope about pigs and Cunning Like a Fox, Clever Crows, Elephants Never Forget and The Owl-Knowing One for other animals stereotyped as intelligent.