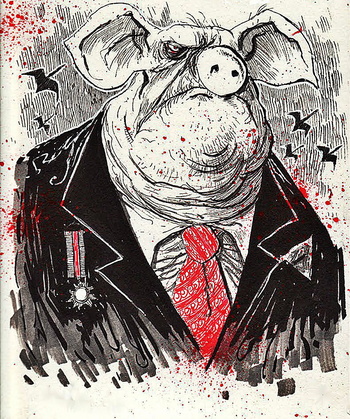 Big man, pig man — ha-ha, charade you are!
Big and fat.
Pig's supposed to look like that.
Barnyard thug,
Sleeps on straw and he calls it a rug,
Yeah, that's a rug, okay...
He's walking down the street
And nobody's gonna argue with him —
He's a half a ton of pig meat!
— "Pigs, Sheep and Wolves", Paul Simon
Advertisement:

Pigs tend to be associated with a plethora of negative traits. This is why "pig" is commonly used to describe unpleasant individuals, much like "rat" or "snake".

As a result, it's not a surprise that many fictional pigs are portrayed as cruel and/or dangerous. It helps that many traits associated with pigs are also traits that evil characters often have. For instance, a Gluttonous Pig or Messy Pig could be portrayed as a Villainous Glutton, Fat Bastard, and/or have Jabba Table Manners; the trope Fed to Pigs might even come into play, which can become even more disturbing when the pigs are sapient. A Perverted Pig can easily be used in conjunction with just about any of the Tropes About Perverts, or in more extreme cases, even Sexual Harassment and Rape Tropes. Boars (especially wild boars) are often portrayed as dangerous and formidable fighters. Even the often-positive Brainy Pig trope can easily be used for a pig that's an Evil Genius or Insufferable Genius.

Many works will use pigs to represent certain Acceptable Targets. Greedy businessmen and bankers are two examples, but so are police officers, especially aggressive, corrupt, incompetent, and/or gluttonous ones.note Since "pig" is often used as a derogatory term for police officers, this may also be done as a Visual Pun. Similarly, a pig may even be a Politically Incorrect Villain of some sort, perhaps as a Literal Metaphor to phrases like "racist/sexist pig".

Pigs are also commonly represented as ominous or scary, especially in the horror genre. The Uncanny Valley might be in effect here, due to pigs having several visual similarities to humans, such as their facial features and often pinkish coloration. Murderers who wear pig masks can be interpreted as a symbol of vengeance or revolution, due to this being a reversal of a pig's usual role of being killed for food. Hedonism/overindulgence, savagery, and violence are other motifs that pig-masked killers tend to be associated with.

In real life, pigs have been known to kill and eat their own kind, and have occasionally devoured humans (dead or alive) when given the opportunity, as a result of them being quite omnivorous and aggressively territorial. However, pigs can be easily trained much like dogs if their territorial actions are caught and discouraged at a young age. Domestic pigs are generally docile towards humans unless they are provoked or starving — however, when provoked, fully grown pigs can seriously injure or even kill someone. That being said, animals do not have a concept of morality, so No Real Life Examples, Please!

This trope seems to be something of a Cyclic Trope, due to the interest of pigs as pets, as well as it becoming more well-known that pigs have a number of positive traits, meaning that people may be viewing pigs more positively. Like many other Animal Stereotypes, the region that the work comes from seems to play a factor in this trope as well; this trope is uncommon in Eastern media, as countries such as China tend to view pigs in a far more positive light and associate them with desirable traits such as good luck, prosperity, status, and wealth. As a result, most examples of this trope will be from Western media.

Most examples of this trope are male, since many of the negative characteristics of pigs (such as hedonism, aggression, and boorishness) are much more frequently associated with men, but female examples also exist.

Evil characters who are animals that closely resemble pigs (such as peccaries and babirusa) can also be examples of this trope. Babirusa in particular may be portrayed as scary due to the upper tusks that grow through the top of their skull, resembling Horns of Villainy.

To fit this trope, the character must be a pig, Pig Man, or otherwise have swine as a prominent Animal Motif. Since "pig" is a fairly common insult, as described above, do not list characters who are compared to pigs as a generic insult.

Compare Our Orcs Are Different, as orcs are often portrayed as pig-like, Always Chaotic Evil monsters. Also compare Full-Boar Action, a related trope about dangerous and aggressive boars. Contrast Housepet Pig. Has nothing to do with Evil Is Hammy (nor any of the other variations of Large Ham, for that matter).

Perfect pig, you bless us with your beauty

,
Hallowed hog, how wonderous is your glow,
Napoleon, mighty leader
Mighty leader watching over us.