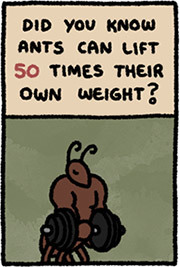 "I know two things about the horse
And one of them is rather coarse."
— Naomi Royde-Smith
Advertisement:

Whenever certain animals are mentioned, works (especially educational ones) will feel the urge to say a certain fact about them. Oftentimes it's intended to sound like something surprising or fascinating, which in general it would be if you didn't hear it every time that animal was mentioned in every work. With many more obscure species, their stock facts may be the only thing anyone (barring specialists) can ever say about them. Can overlap with Artistic License – Biology if it is clearly false. A victim of Science Marches On to the point that all of these facts should be taken with a grain of salt rather than believed outright.

Note: As this trope is based on its ubiquity, the only works that should be listed are aversions, subversions, lampshaded examples, in-universe examples, and other variants.

Rodents and Lagomorphs (Hares and Rabbits)