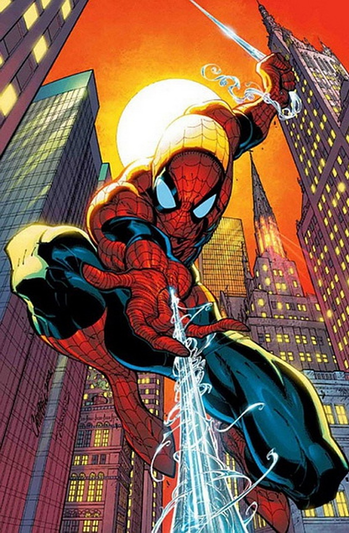 He does whatever a spider can! note Cover by J. Scott Campbell, for The Amazing Spider-Man Vol. 2, Issue #50 — "Doomed Affairs"
Is he strong? Listen, bud!
He's got radioactive blood!
Can he swing from a thread?
Take a look overhead!
Hey there, there goes the Spider-Man!
— Excerpt from the 1967 Title Theme Tune to Spider-Man, and Bootstrapped Theme for the entire franchise.
Advertisement:

The Wallcrawler, the Webhead and the Webslinger. The King of Taunts and Snark. The Everyman Hero. The (non-sidekick) Teen Superhero, 'The' Heart of the Marvel Universe and Company.

Spider-Man is a Marvel Comics superhero created by Stan Lee and Steve Ditko in 1962. He is considered to be Marvel's most popular and famous superhero. He is one of — if not the — premier company mascots of Marvel Comics and is as central to them as Mickey Mouse is to Walt Disney.

Peter Parker is a shy, bookish, and constantly picked-on high school student who lives with his Aunt May and Uncle Ben in Forest Hills, Queens due to the death of his parents. On a field trip to a science lab, he was bitten by a radioactive (and in some newer stories genetically-modified) spider, giving him amazing powers: the proportional strength of a spider, the ability to crawl on walls, a Spider-Sense to warn him of danger, as well as super-fast reflexes. A brilliant young man and budding inventor, Peter developed his own formula for an adhesive fluid that resembles and mimics a spider's web which he fires from wrist-mounted shooters, working as both a grappling tool and a projectile weapon.

Initially ebullient and overawed by his transformation from picked-on kid to superhuman, a Tragic Mistake that leads to the death of his beloved Uncle Ben permanently instills in Peter a sense of responsibility and duty to his fellow citizen. As the web-slinging, wall-crawling Spider-Man, Peter fights crime while trying to keep his identity secret from his widowed Aunt May and from the public at large, even if as a superhero from a struggling background starting out with almost entirely independent resources, he has few ways to defend himself from the misunderstandings and weak communication caused by his actions in the public eye.

Becoming a superhero on the cusp of adulthood, forced to grow up fast while barely having time to enjoy his youth, Spider-Man is the underdog superhero — scrapping to earn every inch of his triumphs, big and small, while living with the consequences of his actions, good and bad, and the ways it affects him and his loved ones for every waking day that follows.

Debuting originally in Amazing Fantasy #15, Spider-Man was an immediate hit and quickly became Marvel's top-selling title and in a few short years, he became one of the most iconic heroes, and despite starting nearly twenty years after both Superman and Batman closed the gap between them to become just as notable and proverbial in the global consciousness. Just like them, Spider-Man has a supporting cast that is equally iconic and popular — his elderly Aunt May, his famous editor/boss J. Jonah Jameson, his school friends and rivals (Flash Thompson, Harry Osborn) and of course his Love Interest who alternately like either Peter but hate Spider-Man or vice-versa, or are otherwise too much for him or anyone to handle (Gwen Stacy, Felicia Hardy, Mary Jane Watson). His Rogues Gallery is also one of the most notable and famous in comics' history — the Green Goblin, Dr. Octopus, Venom, Rhino, Vulture, Scorpion, Mysterio, Kraven the Hunter, as well as a series of popular Legacy Character and sidekicks (Miles Morales, Spider-Girl among others below).

Like Superman and Batman, Spider-Man has proven adaptable to multiple mediums. The arachnid-powered Superhero was relatively new to the Marvel Universe when he made his TV animation debut in 1967. The show's main contribution is the Theme Song ("Spider-Man, Spider-Man/Does whatever a spider can...") which has become a popular standard, and has been covered by artists as diverse as Aerosmith, The Ramones and Michael Bublé. In the 1970s, a silent costumed actor played Spider-Man in the "Spidey Super Series" skits on The Electric Company (1971); he only spoke in word balloons that the show's young viewers were expected to read (there was also a Lighter and Softer Recursive Adaptation comic book series in print at the same time). Subsequent Animated Series teamed Spider-Man with other heroes, such as Firestar and Iceman. This period saw the beginning of the long-running newspaper comic Spider-Man that featured Stan Lee working on it for a longer time than the regular continuity. There was also short-lived live-action series The Amazing Spider-Man (1978) (which was pulled when the network noticed that they were running an awful lot of superhero shows at the same time — Spider-Man was a contemporary of Wonder Woman, The Incredible Hulk (1977) and The Six Million Dollar Man). A live-action Spider-Man was also produced as a toku series in Japan, which borrowed the costume but little else, and teamed the arachnid hero with a Humongous Mecha. (This series inspired the development of the Super Sentai franchise.) Spider-Man also appeared in video games very early and in multiple console generations holding the record for most number of video games for any superhero character, according to Guinness World Records.

Spider-Man's fortunes leaped to new heights with the worldwide success of the Spider-Man Trilogy directed by Sam Raimi which made the character so popular that he remains in demand in movies despite reboots in limited intervals. If he was popular before, he's amazing, spectacular, ultimate, and sensational for all time at this point in as many mediums, analog or digital, as you can find.

Has a character sheet for both his regular comics continuity and the multiple iterations he has appeared in other titles.

Tropes for the Franchise and common features to multiple adaptations go here. Tropes specific to comics stories from the main 616 Continuity, go here.

Spider-Man, Spider-Man
Friendly Neighborhood Spider-Man!
Wealth and fame? He's ignored
Action is his reward!
To him...
Life is a great big bang-up
Wherever there's a hang-up
You'll find the Spider-MAAAAAN!
Feedback