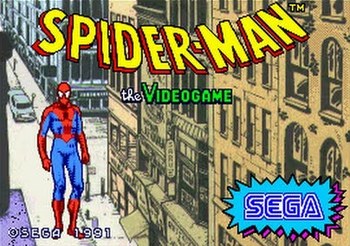 "Spider-Man: The Video Game" is a 1991 arcade game by Sega. It has segments as a Beat 'em Up game, and others as a Platform Game. The player can play as Spider-Man, Black Cat, Hawkeye, or Namor.
Advertisement:

The boss levels include Spider-Man villains such as Venom, Scorpion, the Lizard, Green Goblin, Electro, Sandman, etc. The Kingpin seems to be the Big Bad, and then it turns out to be Doctor Doom instead.

Of course, this is just one of several video games about Spider-Man. See here for a list.