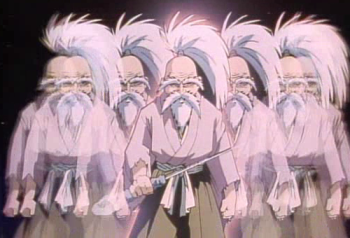 "Don't you hate it when you've drawn a bead on that pesky Ninjamek, and you're just about to blow him into scrap, when he starts appearing all around you, and you can't be sure which one is real and he's everywhere and you can't possibly get them all in time and you keep shooting and shooting but they keep coming and aaaAAARRGH!!!!"
— Mekton Zeta Plus, "Shadow Imager" entry
Advertisement:

Common "attack" used in anime, usually by the opponent of the main character. They will create (or clone) multiple copies of themself, frequently encircling the target.

One of these copies is the real one, while the rest are just harmless illusions to distract their target; said target must find a way to "sense" which one is the correct one and attack it before the entire group closes in to strike.

In video games, finding the "real" one usually boils down to a game of "one of these isn't like the others", by noticing subtle details like whether they use the same attacks, have the same HP or defense power, or cast a shadow on the ground. Another common way of implementing this into a game is having the illusory clones disappear the instant they take a hit, or when the real one takes a hit. Alternatively, one might have to access the ability of True Sight.

A common diversionary tactic with Ninja.

A common subversion is that none of the clones is the real adversary, who is secretly hiding somewhere nearby instead.

If the copies are tangible enough to be a threat on their own, independent of whichever is the "real" one, it's a Doppelgänger Attack. For the use of tangible doppelgangers outside of combat, see Me's a Crowd.

The practice of seeing through the illusions to attack the "real" one can be thought of as a type of Shell Game. Spotting the Thread, Spot the Imposter and especially Imposter Forgot One Detail are related tropes, playing with the idea of spotting small differences in a way often very similar to this trope.