Literature / Caverns of the Snow Witch 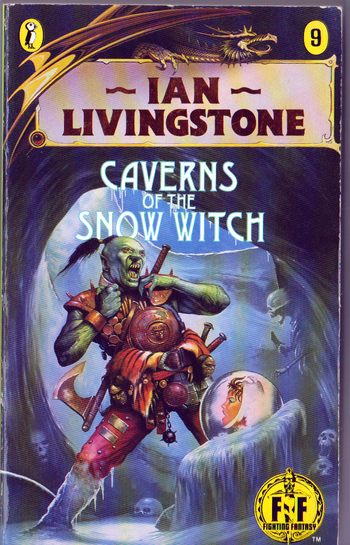 We mean the one in the crystal ball, of course
Advertisement:

Caverns of the Snow Witch is the ninth entry in the Fighting Fantasy line of Gamebooks, written by Ian Livingstone.

You are a trapper, venturing forth in the snowy lands of northern Allansia, at the feet of the Icefinger Mountains, tasked with hunting down a dangerous beast that pillaged an outpost before fleeing to the north. Halfway through your mission, you find out that the terrible Snow Witch, whose lair lies nearby, is plotting a terrible spell that will plague the entire world with blizzards and start a new Ice Age. It's up to you to find the frozen dungeon, venture forth in the maze, stop the witch and leave alive to escape her terrible curse.

Caverns of the Snow Witch provides examples of: