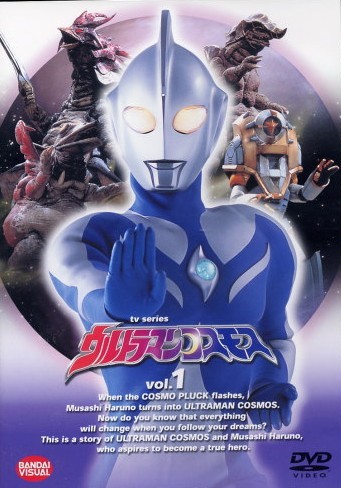 Ultraman Cosmos is the eighteenth TV show in the Ultra Series, which aired on Tokyo Broadcasting System from July 6, 2001 to September 27, 2002.

Musashi Haruno, a member of the science investigation team EYES with dreams of peace between humans and monsters, has to deal with the Chaos Header virus, which is corrupting Earth's monster population into violent berserkers. Soon enough, he meets again with his childhood friend Ultraman Cosmos, and together they strive to heal the monsters' blight.

The series has its own feature film prequel, Ultraman Cosmos: The First Contact, which depicts Musashi's first contact with Cosmos.

Cosmos takes a much Lighter and Softer approach to the formula, with a kinder and gentler Ultraman that mostly fights on defense and prefers to save monsters instead of killing them.