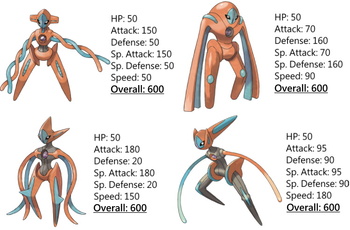 Multiform Balance occurs when creators take care to make each multiple form of a Shapeshifter, such as a Henshin Hero, a Swiss Army Hero or a Morph Weapon-type Swiss Army Weapon, useful in its own way. The easiest way to do this is to make each one suited for a certain tactical situation or to use certain tactics. For example, a werewolf doing a Partial Transformation to a Wolf Man may not be able to talk, but can still use weapons and has greater strength than a man, but isn't as fast as a wolf (except maybe if it can go onto all fours).

In essence, it's applying Competitive Balance between each of the character (or weapon)'s forms. In fact, the character types laid out in Competitive Balance or other power balancing tropes can be quite useful in describing the character's forms. To be precise, the "balance" usually only applies to "basic" forms, with a Joke Character form only being used when the character doesn't have access to the basic forms. Lightning Bruiser and Super Mode are mostly a Mid-Season Upgrade and superior to basic forms in every aspect; if the balance also applies to these forms, it's usually by making them a Deadly Upgrade, Limit Break, Hour of Power, or otherwise Awesome, but Impractical.

Related to Stance System, with each form being considered as different "stances". May overlap with Evolution Powerup, especially if new forms are gained/discovered as the plot demands, although Multiform Balance can switch back and forth. Can also overlap with Swap Fighter, which often offer a set of characters that cover each others' weaknesses. When Humongous Mecha use this trope, it's usually done with Mecha Expansion Pack or Transforming Mecha. May also be done with Shed Armor, Gain Speed.