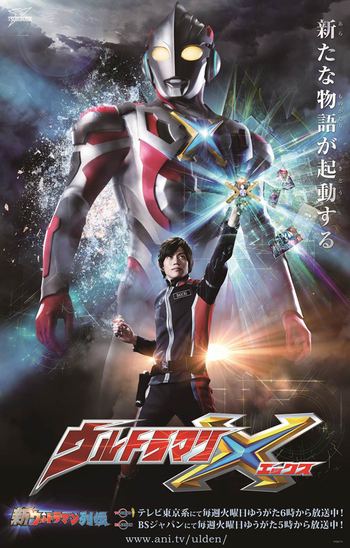 Ultraman X is the 2015 entry in the long-running Ultra Series. Like Ultraman Ginga, it is a part of the New Ultraman Retsuden programming block.

Fifteen years ago, a mysterious solar flare from the Sun activated a number of extraterrestrial artifacts scattered across the Earth. Once they are fully energised, these "Spark Dolls" are transformed into titanic monsters that rampage and threaten the lives of innocent people. In response to this threat, an international task force known as UNVER was created to study and contain the Spark Dolls. Standing on the front line is "Xio" (Xeno Invasion Outcutters), an elite combat and response team equipped with the latest in human technology.

One day Daichi Ozora, a talented young member of Xio's Research and Development Lab, discovers a mysterious energy being who exists in the form of computer data. By offering his physical body to the being, the two fuse together into Ultraman X: a heroic giant of light with the power to equip Cyber Monsters as "Mons Armour" and gain their abilities. Together, Daichi and X may be able to discover the secrets behind the Spark Dolls and the "Ultra Flare" incident that started everything.

, making it the first Toku show in history to ever do that.

Ultraman X defeats and destroys Greeza, causing a massive explosion after launching his ultimate attack at it.

Ultraman X defeats and destroys Greeza, causing a massive explosion after launching his ultimate attack at it.