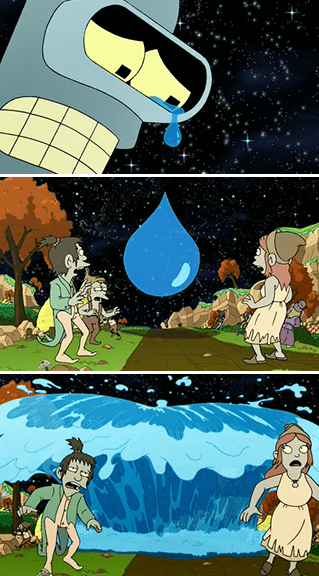 When a person that big cries, the tears are big, too. This means that the tears could potentially create a flash flood. Even a Single Tear can be a major disaster. But when the giant isn't literally Crying a River, the tears are usually an inconvenience. In that instance, the characters pull out an umbrella as if they were rained on. A Cute Giant, Gentle Giant, or a Giant Woman may do this. Giant tears can also be a problem for any small animals and people if they encounter a human who decides to have a good cry. This can also happen if a shrunken character comes across a regular-sized person who is huge in comparison. Other bodily fluids such as pee and blood can count as long as the droplets are large enough to drench someone smaller than the source of said droplets. If a giant vomits, there will inevitably be a Vomit Indiscretion Shot. If the fluid in question is saliva, it may result from a *Drool* Hello. Will often result in Covered in Gunge, especially if it's a giant's snot.

This trope is most often utilized in Western Animation, but it can also be used in other media. This trope may also happen in an Alice Allusion (specifically, a reference to the "Pool of Tears" scene).

Part of the Tear Tropes index, This Index Is Not To Scale, Bathroom Tropes, and Bloody Tropes. Sister trope of Attack of the 50-Foot Whatever. Crying a River and Ocular Gushers may be involved, as will Overdrawn at the Blood Bank when it comes to a giant bleeding. Potty Failure and Potty Emergency can be involved. This trope may also result from Urine Trouble, especially if it's from a Canis Major. Compare to Giant's Knife; Human's Greatsword, which involves weapons. Usually Played for Drama, but can be Played for Laughs as well.