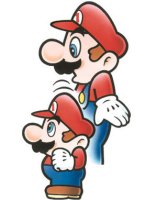 Mario gets a Super Mushroom
"You're still a little man, Banner. Now, knock it off or I'm gonna squish you."
—Giant-Man, Ultimate Avengers