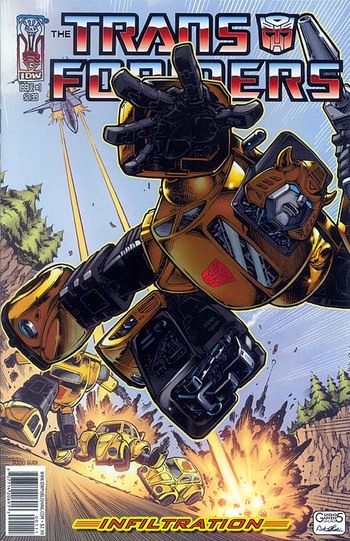 When we say "disguise," we really mean it this time!
Advertisement:

A series of inter-connected mini-series published by IDW Publishing, the first in their version of the Transformers continuity. Most of these stories were written by Simon Furman. These stories tell a much different story than fans were used to, where the war between Autobots and Decepticons is more of a cold war, Cybertron has been abandoned, and Earth is not the frontline but an mostly unimportant dirt-ball, that is until the Decepticons find an all-new fuel source, one that could give them the edge.

The mini-series first started in 2005, with Infiltration (and the tie-in Stormbringer), followed by Escalation, then Devastation, and finally Revelation. Also released concurrently were the Spotlight issues, which usually followed one character while setting up future plot points for the main series. These series were eventually halted in favor of The Transformers: All Hail Megatron, though Furman was given the chance to wrap up several of his plot points in Maximum Dinobots.