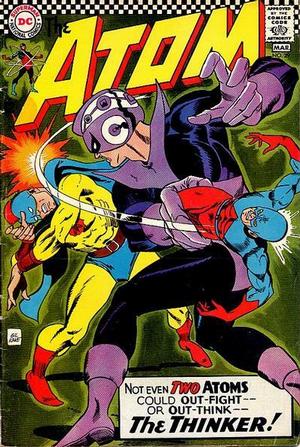 The Atom is a DC Comics superhero character, best known for being "the tiny one in the Justice League." (Because of his shrinking powers- he's usually 6 inches tall.) He had his own series for most of the Silver Age, though hasn't been much of a headliner since then. (Should not be confused with Captain Atom. Or Atom Smasher. Or an actual atom.)

Actually, there have been three superheroes named The Atom. The first was Al Pratt. He first appeared in "All-American Comics" #19 (October, 1940), created by Ben Flinton and Bill O'Conner. Pratt was a short guy who got a boost in confidence after being trained in boxing, so he became the masked hero The Atom. (Because he was small but powerful, get it?) He had no actual superpowers, but was instead a Badass Normal. (It was later retconned that exposure to radiation gave him super strength.) His series continued appearing in "All-American Comics" until its 72nd issue (April, 1946). He was a founding member of the Justice Society, appearing in most of its adventures between 1940 and to 1951. He got a second series of his own in the back pages of "Flash Comics", lasting from issues #80 to #104 (February, 1947-February, 1949). The character went into hiatus in 1953, but was revived in 1963 along with other Justice Society members. He became the father of the superhero Damage and the godfather of the superhero Nuklon.

The second Atom was introduced during the The Silver Age of Comic Books and had nothing in common with the first other than the name. He first appeared in "Showcase" #34 (September, 1961), created by Gardner Fox and Gil Kane. Ray Palmer was a physicist who found a meteor made of "white dwarf star matter" that he fashioned into a lens capable of shrinking and expanding objects although the latter process would cause said objects to explode. After getting trapped in a cave with his girlfriend Jean Loring and a group of students, Ray uses the lens to shrink himself to create an escape route knowing full well he will die in the process of regaining normal size. Much to his shock, he does not explode but instead instantly and safely returns to normal size when he reenters the lens' beam, which he attributes to a unique energy inside his body.note Eventually this was retconned into Ray having discovered and incorporated a "compression matrix" into his costume that allowed him to change size at will, in order to explain the later several instances of people using his costume and powers with no problems. Ray incorporates the lens in a costume that allows him to shrink (all the way to subatomic size!) and also change his weight. Despite these unlikely powers he became a successful hero and joined the Justice League. Palmer is also known for having one of the worst romantic lives of any superhero: Jean Loring, his long-time girlfriend (then wife) not only cheated on him, she later went insane and even later became a supervillain. At one point Palmer had a series of Low Fantasy adventures in the Amazon Jungle involving a tribe of really tiny aliens (in the "Sword of the Atom" miniseries).

The Palmer Atom got a regular series, named "Atom", in July, 1962. It lasted in its original format to issue #38 (August, 1968). He was then paired up with Hawkman, for the remaining issues of his series. "Atom and Hawkman" lasted from issue #39 to #45 (October, 1968-October, 1969). Then the series was cancelled. Palmer got a 4-issue mini-series called "Sword of the Atom" (September - December, 1983). Three "Sword of the Atom" special issues appeared between 1984 and 1988. Palmer then got a regular series, "Power of the Atom", which lasted 18 issues, from August, 1988 to November, 1989. After that the character mostly had regular appearances in team books and crossovers.

The third Atom was Ryan Choi, an Asian American scientist who inherited Palmer's costume and position at Ivy University after he disappeared following the events of Identity Crisis. He first appeared in the one-shot "DCU: Brave New World" (2006), created by Gail Simone and Grant Morrison. He starred in his own series for 25 issues (September, 2006-September, 2008). He was then unceremoniously killed off, to the chagrin of his fans (and Gail Simone). Being one of few superheroes of color, Choi's death sparked a major controversy.

Following Flashpoint and the New 52, Palmer appeared as a major supporting character in Jeff Lemire's Frankenstein: Agent of S.H.A.D.E., without the Atom identity. Also in the New 52, Al Pratt was moved with the rest of the Golden Age JSA members to the Earth 2 series, written by James Robinson, and given Nuklon's power set.

The Justice League series of the New 52 introduced a new character with the Atom mantle in issue 18. Her name was Rhonda Pineda, a Latina college student at Ivy University. She initially made a few cameos during the Throne of Atlantis arc, where Cyborg signalled her and several other heroes to help the League stop an Atlantean invasion. Rhonda formally met the League in issue 18 and was recruited along with Firestorm and Element Woman. Issue 23 revealed that her real name was Atomica and she was essentially the Atom's evil counterpart from Earth-3. She spent her time with the Justice League so she could incapacitate them just before the evil Earth-3 Justice League arrived on Earth, allowing them to take over the world unopposed. She eventually got killed by Lex Luthor at the end of Forever Evil (2013).

DC Universe: Rebirth #1 introduced Ryan Choi to the post-Flashpoint continuity, now several years younger, as an assistant to Palmer at Ivy University. Palmer by this point had taken up the Atom identity and costume, and Choi inherited a copy of the costume after he went missing, similarly to his original version. He subsequently got a one-shot written by Steve Orlando, Justice League of America: The Atom - Rebirth, explaining how he had become Palmer's assistant and helped him in his adventures as the Atom before he took up the mantle himself, as a prelude to joining the Orlando-written Justice League of America.

The Ryan Choi Atom was the most often seen in the Batman: The Brave and the Bold show, though Palmer also appeared in one episode (that was based on Sword Of The Atom). He also represents the costume in Injustice 2. Ray Palmer was the one in Justice League Unlimited, and referenced in Justice League (regular). Prior to that, a future version of the Atom known as Micron appeared in Batman Beyond as a member of the future Justice League. Additionally, a series of shorts dubbed Sword of the Atom were aired on the DC Nation block on Cartoon Network. Ray Palmer also had a minor recurring role in Young Justice: Invasion as the mentor of Bumblebee. The first appearance for the Atom in other media was in the late 60's Superman/Aquaman Hour Filmation series (other DC heroes also took part in rotating segments). Palmer appears in live-action, played by Brandon Routh in the CW series Arrow, though his role was originally intended to be filled by the Blue Beetle, and bears rather more similarities to him than the comics' Atom. However, Palmer's shrinking abilities feature in the spinoff, Legends of Tomorrow. Choi would make his Arrowverse debut in the latter three parts of the universe’s Crisis on Infinite Earths adaptation. Choi also appears as a STAR Labs scientist in the DC Extended Universe, in Zack Snyder's Justice League, played by Ryan Zheng.

For completeness, we should mention Adam Cray, a senator's son who temporarily used Ray Palmer's belt and Atom codename in the Suicide Squad series. He too was killed off.

Notable Appearances of other versions

The Atom(s) display examples of the following: