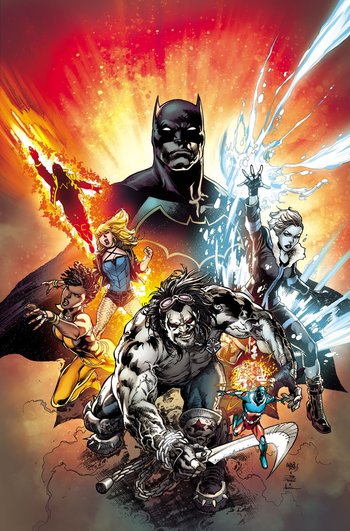 The rougher, tougher Justice League.
"The world needs heroes they can know, not gods, to inspire them—show them they can be heroes."
Advertisement:

Justice League of America is the second main Justice League ongoing series to be part of the DC Rebirth initiative, running twice-monthly from February 2017. Written by Steve Orlando (Midnighter, Supergirl) with art by Ivan Reis (Blackest Night, Aquaman), the series follows a second Justice League team formed by Batman in the wake of Justice League vs. Suicide Squad. The team consists of:

Noticeably, the cast has strong ties to the Arrowverse, with much of the team having a counterpart in one of the shows. It features an Atom (Legends of Tomorrow has Ray Palmer in Powered Armour), Vixen (Legends features an ancestor of Mari's, and Mari appeared in Vixen), Killer Frost (The Flash (2014) features Caitlin Snow) and Black Canary (both Legends and Arrow have Canaries), with the Ray slated to get his own animated series as well.