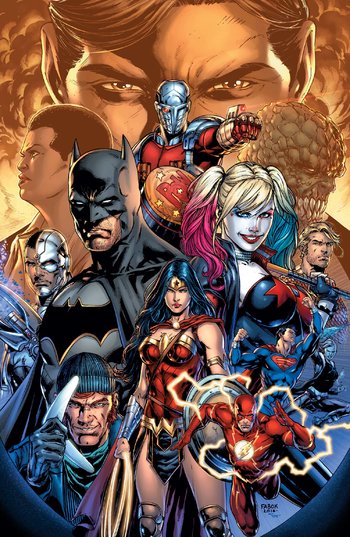 Justice League vs. Suicide Squad is a 2016-2017 crisis crossover published by DC Comics —and the first major event of the DC Rebirth era— written by Joshua Williamson with art by Jason Fabook.

For years, the Suicide Squad operated in the shadows under Amanda Waller's tight leash, assembling only when needed. Nobody could ever learn of their existence, and nobody outside the loop ever has.

Except Batman, that is. Turns out he's known about Task Force X —the Suicide Squad— for a little while now, but has never had any reason to divulge his intel with the rest of the Justice League.

Until now. As you'd probably expect, their first meeting doesn't pan out very peacefully. But when a Greater-Scope Villain threatens both teams equally, they'll have to come together to stop it — or die trying.

While the aftermath of this event is sure to be substantial for both sides involved, perhaps the biggest product of Justice League vs. Suicide Squad is the new Justice League of America (Rebirth) series written by Steve Orlando (Midnighter), featuring Batman forming a new iteration of the JLA populated with the likes of Black Canary, Lobo, The Ray, Vixen, Killer Frost, and The Atom.