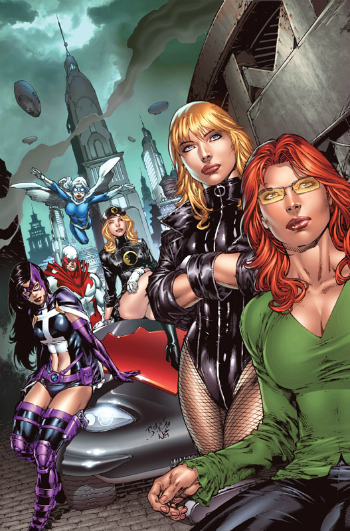 Because you should never need to choose between beauty, brains or brawn... or a good HAWWWKAAAAAA!
Advertisement:

Birds of Prey is a DC Comics series running from 1999 to 2009, relaunched in 2010, and relaunched again as part of the New 52 in 2011, created and originally written by Chuck Dixon. It features ex-Batgirl Barbara Gordon after she was paralysed at the hands of The Joker in Alan Moore's The Killing Joke and reintroduced in the Suicide Squad series of the early-90's. Now the tech-savvy Oracle, she is a wheelchair using computer genius who leads a team of superheroines from a high-tech HQ. Originally located in the Clocktower in Gotham City, her headquarters was later moved to Metropolis and then to Platinum Flats.

Under Dixon the team centered around Oracle and the Black Canary as they began working together and building a personal relationship in addition to their professional relationship. When Gail Simone took over writing duties she introduced the Huntress, and several storyarcs later Lady Blackhawk to round out the core group, with heavy emphasis within the story that their family was just as important as their crime fighting adventures. This teaming persisted until Canary's departure, around the time of her marriage to Green Arrow, after which the Birds took on a more fluid line up with Huntress and Lady Blackhawk as senior field team leaders, and Misfit as regular Bird-in-training. However, the rest of the team was filled in such a way that it seemed like any female character from The DCU might show up next. Manhunter also became a regular during this period, supplemented by other heroes as needed.

Gail Simone eventually left the series and was replaced as writer by Sean McKeever and later Tony Bedard. Under Bedard's pen, the team moved to the new locale of Platinum Flats, where they were joined by the mysterious Infinity and focused on fighting the "Silicon Syndicate". However, soon after the location move the series was cancelled, along with the Nightwing and Robin titles, in the wake of Final Crisis and the death of Batman. The separate characters were either transferred to other titles or quietly dropped from active publication and the final arc was left unresolved.

The title was revived in May 2010 under Gail Simone and Ed Benes, initially featuring a Brightest Day banner, with Oracle, Black Canary, Huntress and Lady Blackhawk back in Gotham and Hawk and Dove as new regulars. This was a popular move. Gail's final issue was #13, released June 8, 2011, after which there was a two issue guest arc by Marc Andreyko, naturally featuring Manhunter.

In September of 2011, Duane Swierczynski and Jesus Saiz took over creative control of the series with the company-wide New 52 relaunch. The New DC team is composed of Dinah Drake Lance (Black Canary, mother of previous star Dinah Laurel Lance), Tatsu Yamashiro (Katana), new creation Ev Crawford ("Starling"), Pamela Isley (Poison Ivy), and Barbara Gordon (Batgirl). Huntress (now Helena Wayne, not Helena Bertinelli) has some connection to the team, though her adventures were detailed in her stand-alone miniseries and the Worlds' Finest ongoing series, with any connections to the Birds currently remaining a mystery. A little over a year after the relaunch, it was announced that Strix, a former member of the Court of Owls would be joining the team. The series floundered creatively after Swierczynski left, and was cancelled at issue #34.

In 2016, the title was relaunched as Batgirl and the Birds of Prey as part of DC Rebirth, with Shawna and Julie Benson as writers and Claire Roe as the artist. Like many of the Rebirth titles, the new series was launched with the goal of hearkening back to the pre-New 52 version of the team, with the group now consisting of Batgirl (Barbara Gordon), Black Canary and Huntress.

The series served as the basis for a live-action TV series which took a different approach to things. The core of the team is Huntress (daughter of Batman and Catwoman, as per her pre-Crisis backstory), Dinah, a touch-telepath and the daughter of Black Canary, and Oracle (Barbara Gordon, forced to give up being Batgirl after becoming paraplegic). Harley Quinn serves as the Big Bad. Tropes for this iteration of the concept can be found in the article Birds of Prey (2002).

In September 2010, Simone wrote an episode of Batman: The Brave and the Bold which featured the team in a leading role. Though the character interactions were similar to those featured in the comics, Oracle was omitted from the team due to her absence from the show's established canon (and, according to the creators, rights issues). However, her role as the third member of the team was filled by Catwoman, who herself occasionally worked with the Birds, primarily during Chuck Dixon's run.

A movie set in the DC Extended Universe was released on February 7th 2020, titled Birds of Prey (and The Fantabulous Emancipation of one Harley Quinn). It's the first R-rated DCEU movie, and features a rather creative cast of Harley Quinn, Black Canary, Huntress, Renee Montoya, and Cassandra Cain. Barbara Gordon is not featured as she has not yet been introduced to the DCEU.