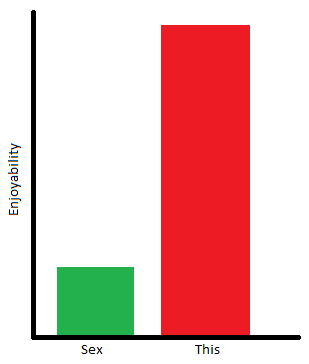 I don't know exactly what "this" is... but I know I want it!
"Take the best orgasm you've ever had, multiply it by a thousand, and you're still nowhere near it."
— Renton (on shooting heroin), Trainspotting
Advertisement:

A Stock Phrase where a character compares an activity or sensation to the act of lovemaking and claims that it is better.

Often, it is used to describe something pleasing or enjoyable in hyperbole or, more tragically, to reflect the attitudes of people with immense cravings or addictions for particular things (especially drugs). Though on occasion, it may also be a sign that the person using the phrase hasn't had a very enjoyable sex life.

Compare: Just Like Making Love, Geeky Turn-On, Nerdgasm, Why Don't You Marry It?

Not to be confused with the essay collection by Hunter S. Thompson. (He was talking about political journalism.)

Itâs good enough to keep being a virgin

Itâs good enough to keep being a virgin