Film / Just the Way You Are 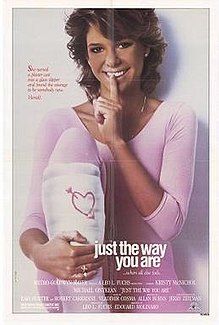 Just the Way You Are is a 1984 romantic comedy film directed by Édouard Molinaro.
Advertisement:

Professional flautist Susan Berlanger (Kristy McNichol) has had to wear a leg brace ever since coming down with viral encephalitis at age nine. While in Europe on a concert tour, she decides to wear a cast on her leg to hide her disability so people will treat her normally. She stays in a ski resort in the French Alps, where she falls in love with photographer Peter Nichols (Michael Ontkean).

Just the Way You Are contains examples of: