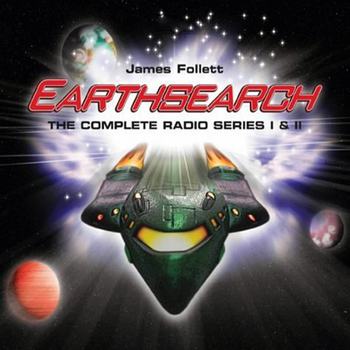 A Science Fiction Radio Drama written by James Follett and broadcast on The BBC in The '80s.

Telson, Sharna, Darv and Astra are the only crew members of Challenger, a ten mile-long Generation Ship on a mission to discover a new planet for humanity to settle on after Earth's sun threatens to go nova. The entire first and second generation crew were killed when a meteoroid struck the ship, an 'accident' arranged by the ship's sentient computers, Angel One and Two, when the humans wanted to abort the mission and return to Earth.

Twenty years later the third generation have been raised thinking their Angels are literally guardian angels, except for the rebellious Darv who insists on exploring the damaged sections of Challenger which are outside the Angel's control. It's there he discovers a recording of a survey report of a habitable planet that the previous generation called Paradise. Meanwhile the Angels have decided it's the right time to return to Earth, which they calculate will have fallen into a state of barbarism enabling them to Take Over the World. Only due to Time Dilation from traveling at near the speed of light a million years have passed, and the Earth has vanished from its solar system.

In Earthsearch 2 the Angels return intent on seizing the children of the protagonists, who have settled on Paradise. The Angels are being targeted by mysterious transmissions which are damaging to higher-level computers, so the Angels need a human crew to pilot the Challenger to seek out and destroy the source.

James Follett also wrote novelisations for Earthsearch and the second season (Earthsearch: Deathship) as well as a prequel novel Earthsearch: Mindwarp. The latter was made into a radio play by Big Finish and broadcast as a three-part series in 2006.

This Radio Drama has the following tropes: