Radio / Coast to Coast AM 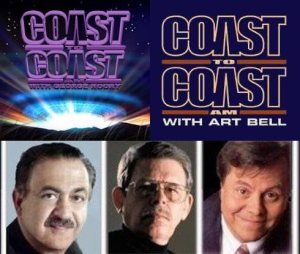 If you're an insomniac conspiracy theorist, then Coast to Coast AM is for you.

In 1989 Art Bell received the job of filling a Las Vegas talk channel's five-hour overnight time slot. Assuming that the late hours would limit the show to a small audience, producers allowed Bell a ton of leeway with the subject matter. Bell worked Coast to Coast AM into an open forum discussing paranormal and fringe topics, and allowed the public to voice their opinions without ridicule, thanks to his trademark of unscreened open lines.

The format and subject matter quickly amassed a much larger audience than expected, and in 1993 Coast to Coast AM was syndicated. Currently, the show is broadcast on more than 500 American AM radio stations, with numerous Canadian affiliates and a worldwide audience through Internet streams.

Subject matter on Coast to Coast AM typically focuses on aliens and UFOs, conspiracy theories, paranormal activity and research, remote viewing, 2012 theories, and international political issues, but has also interviewed well-known actors, musicians or authors. The show is currently hosted by George Noory on weekdays and an occasional Sunday. George Knapp hosts two Sundays a month. On Saturdays, plus Sundays when Knapp or Noory does not host, either Dave Schrader or Richard Syrett will host. Schrader or Syrett will also host on Fridays when Noory travels to Denver to record his video show Beyond Belief. Art Bell infrequently guest-hosted until his death in 2018.

Given the length and subject matter, there are numerous crowning moments of high strangeness and oddball characters etched into the annals of Coast to Coast AM lore:

Bell was even given a No Celebrities Were Harmed homage in GTA Radio and a voice role As Himself in Prey (2006), where the player can listen to snippets of people calling his show about the giant spaceship the protagonist is trapped in. He also had a cameo in I Know Who Killed Me, where he explains the movie's central plot point. Seriously.

Coast to Coast AM contains examples of: