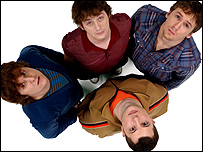 Cowards are a British sketch troupe comprised of Tim Key, Stefan Golaszewski, Tom Basden (who also created the sitcom Party) and Lloyd Woolf. Two series of their eponymous sketch show were broadcast on BBC Radio 4 in 2007 and 2008. In 2009, BBC Four broadcast a three-episode TV version, which was nominated for a BAFTA. One notable collaborator and former member is standup Mark Watson.

Sketches by Cowards provide examples of: